a spin cycle in perdition

this is copied from a letter to a friend. If you are as tired of illness as I am, skip this one. Come back another day. I'll live.

the funny part is that in my day job, one of the things I do is take reports of customer illnesses from restaurant managers. Sometimes we snicker amongst ourselves. No more. And I know why people don't bother going to the doctor. It comes on too fast and you'd die in the waiting room, if you could get seen at all. There is nothing to do but suffer.

I literally spent most of the night sitting on the john with a trash can between my knees. At one point all three of our cats were sitting there watching me. I think they had a pool going to see when I'd pitch forward to land face down in the litter box.

The next 24 hours I lay in the bed, staggering to from the bathroom. Ebola would have been nice. At least the CDC would have come taken me to a nice hospital bed. Colin delivered ginger ale and water at arms length because, at first, I thought I had finally gotten the stomach virus that Jake and Missy had but the speed at which this blew through my body pointed to a bad whipper.

At some point Tuesday afternoon, my mother's ghost visited me. I wasn't even surprised.

First she called on the phone and then we sat at her kitchen table. Drinking coffee, me waving off her cigarette smoke, the two of us eating half a Sara Lee pound cake. we argued, I appealed to logic. She gave me her wisdom of the ages routine . All the time she was making her Christmas list.
It was so real.

After a night of dreamless sleep I woke up feeling like I had been trampled like elephants. I am fairly sure I have a broken rib. I woke up in time to have my little buddy delivered to my doorstep since I was still breathing and able to be upright. His little face was good medicine. 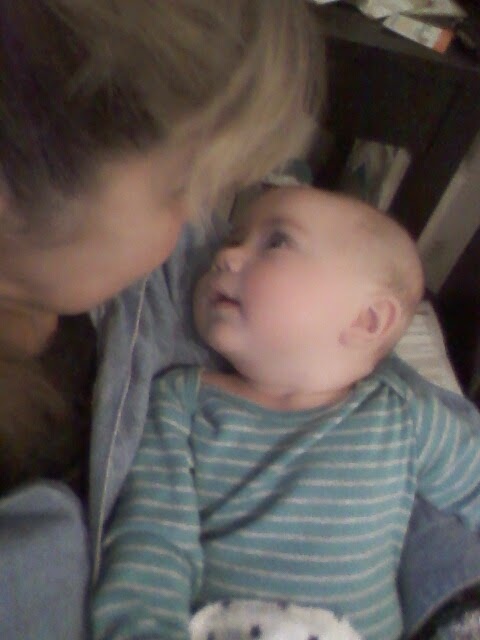 At some point in my delirium, my friend, the artist Pat Chauncey, died after a long struggle with cancer.

We never met but over the course of the past two years she has been a source of strength and inspiration. She will be missed by a vast army of friends and family.
at January 15, 2015