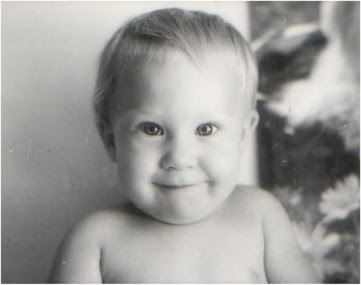 Colin modeled a bit when he was a baby.  How could he not, as cute as this and he was a laughin' fool the minute anyone broke out a camera.

The day came for a TV commercial try out for the Glow Worm toy.
Colin was very small and his almost invisible blondness made him look more a baby than the running toddler he was at a only year old.

When we got to the shoot in NYC  they sat him up on a raised dais - cameras, lights and people everywhere. Colin was unflappable. The toy company exec, the photographer, the director and all the support people fussed over how adorable and perfect the baby was for their plans.

I stood back as an assistant showed him the toy. You squeezed it's belly and the face would light up. He showed it to Colin and demonstrated it's magic.
Colin smiled obligingly, squeezed it a few times and then looked up and said very clearly for the whole room to hear "This is a stupid toy". 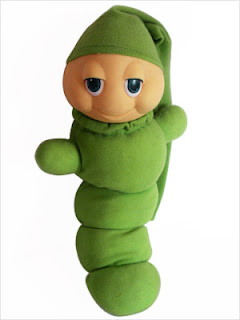 The director fell back clutching his heart, the client walked out and everyone else was peeing themselves and smothering laughter.  It was hysterical. No one expected such a little baby to have such a big mouth.

The AD picked Colin up gingerly and handed him to me like he was radioactive and said "He's a little too articulate for our needs today, thank you".

We had ice cream before boarding the train for the suburbs and I had to scold him on the ride home for rumpusing  and disturbing the sleepers. On reflection, the sugar rush was my fault. Modeling was not fun anymore. Thus ended our career in TV.

(in case you haven't figured out the vintage of this story, these pictures were taken in 1981)

he was right though...it was a dumb toy, had a hard head on it.

That's hysterical! I love that kids are more intelligent than a lot of adults give them credit for!