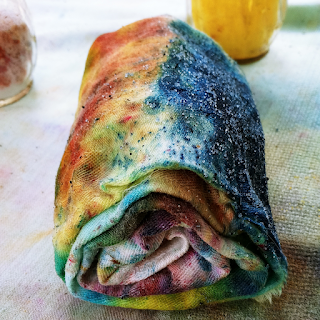 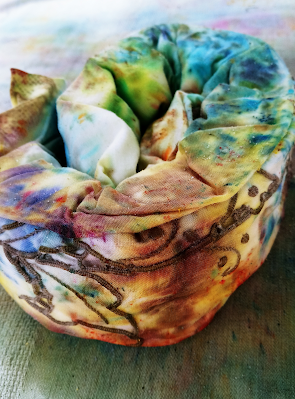 Something new, on something old. I laid out torn lengths of cloth and put the wet skeins of thread directly on them. Made the magic with the dye, then rolled the skeins up in the cloth like burritos and put them in sun to poach.  Dyers call it batching.
I never put much stock in batching. I've washed out cloth within an hour of dyeing and left cloth crusty with dye for days and never observed a big difference. I did it today because I bit off more than I could chew. Too much of everything- cloth, thread, dye, heat- so batch it will, under the stars with owls serenading. A little extra magic never hurt. 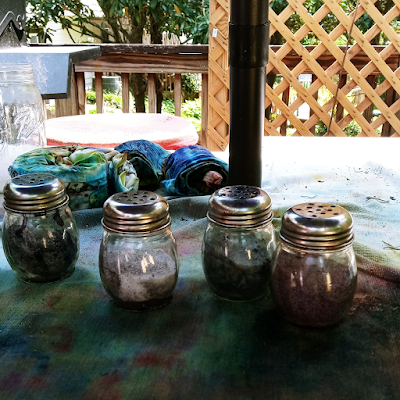 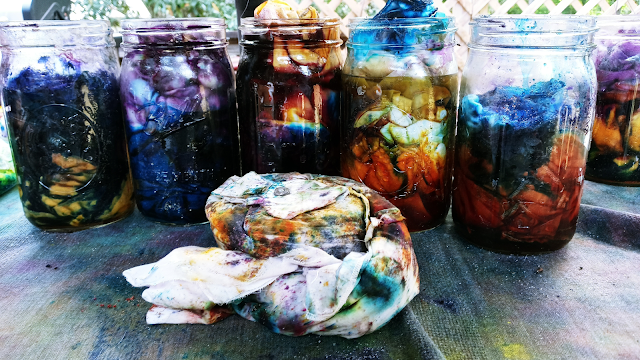 It's been years since I've used the mason jars this way.  This is just the first step for these pieces. And there's still an acre of premium white muslin that I'm going color to make myself a couple of summer schmattas.
at April 30, 2022 4 comments:

It looks like it might be longer than I anticipated to get the store restocked. Smaller batches take more time and less energy. I have the same amount of time that everyone else does, moment to moment. How I use it is different these days. 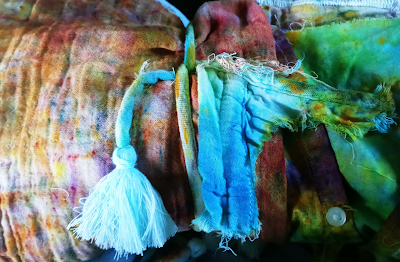 This cloth is just a by-product of the most recent thread dyeing session. I put scraps down on the work table and then lay out the skeins of thread right on the cloth as I work.
This time I folded the pieces of cloth over the skeins and rolled them up like burritos and left them in the sun.  Forgot about them until late in the day which added another whole day to the process. No more getting it done in one day. 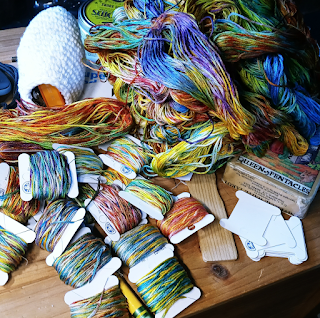 The ties with fringes and bits of cloth flagging on the ends are very interesting. Holding on to them in hopes of something speaking to me.
The threads are turning out beautifully. I'm in love with Bluebird. Not very promising when first applied - muddy almost. I was never a fan of warm blues - extreme me always rolled right over into purple- but this blue is glorious. 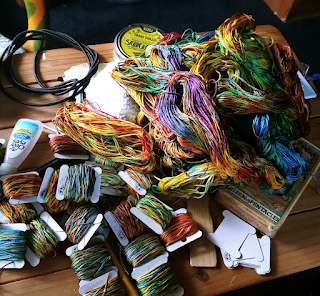 I promised myself I wasn't going to wind these onto bobbins, but here I am. Stopping now before my fingers and wrists make me sorry later.
at April 25, 2022 3 comments: 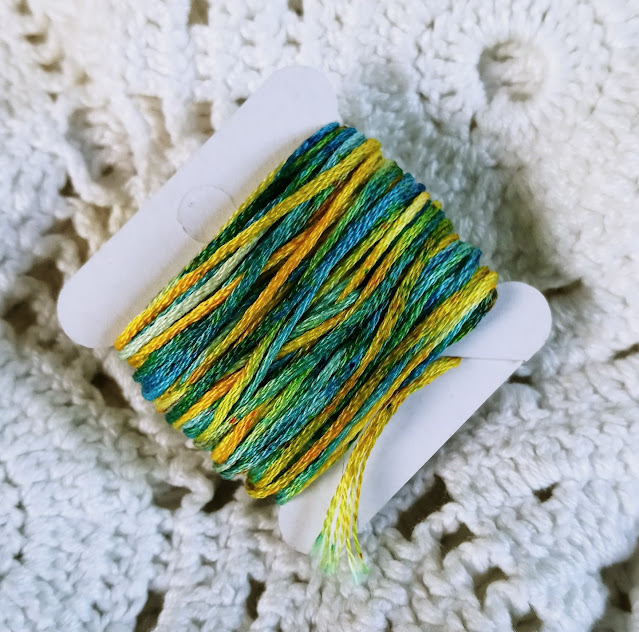 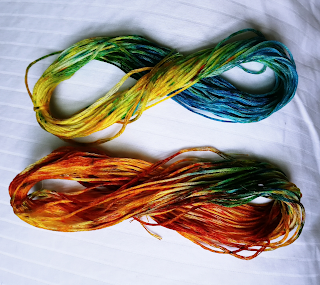 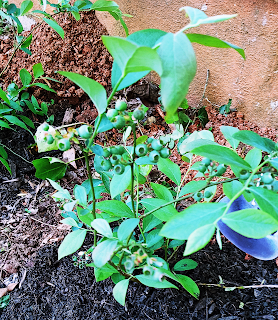 First things were first. The blueberry bushes I bought last week HAD to get in the ground. With no way to operate a shovel, I sat in the dirt and bored into the miserable Georgia clay with a nice sharp hand trowel. I made the holes big enough to add some decent topsoil back in with the plants. I hope I wasn't digging three graves. They already have berries on them!
I have since learned that I need to buy a few more of a different breed of blueberry for some plant sex reason. I won't pry. But I am going to task one of the menfolk here with digging any future holes. 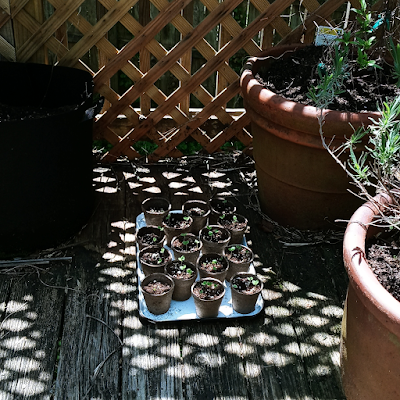 Baby hollyhocks had to come outside because Milly ate a few. I hope to establish these as perennials but I've had no luck in years past. One came up every year in the mailbox garden but every year succumbed to some kind of leaf rust.
Hopefully, some of these new ones are hardier.
at April 22, 2022 2 comments:

Spring is finally on us. Even though I woke to see frost on the cars the other morning,  the two cherry and grape tomato plants I put up against the chain-link fence didn't seem bothered. Dropped a handful of hyacinth bean vine seeds along that same fence today. There might be blueberries.

The house on the other side of the fence has been empty since late summer last year. The bank that owns it spent a lot of money putting lipstick on a pig and I'll tell anyone who comes to look at it, buyer beware. But the new concrete section of the driveway should warn them that there is a drainage problem. Still, I'm going to plant a row of sunflowers along the garage wall that faces my bedroom window so I can enjoy the view.

The worst of the pollen has passed which means it's time to drain and refill the pool! 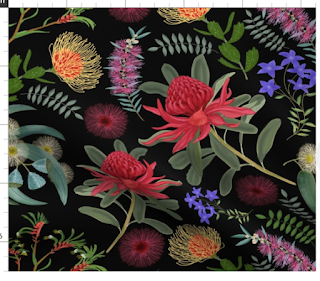 Damn little creative stuff going on, but Spoonflower is devilling me hard! 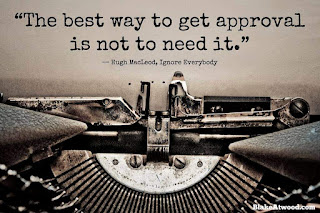 I killed a scene the other day. After fighting with it for more than a week, I realized that it was never going to do what I needed it to do. Even worse, my need was mistaken for something that mattered. It was a relief!

As of today, I've given up herding half-baked rabbits--trying to order up scenes that aren't even written, just a fragment on an index card for some. The whole outline thing feels more like a wool suit with no underwear so, screw all that. It's been keeping me away from actually writing anything. I can't blame the lack of progress on not having time. I'll never be able to play that card because I know how the last six years have been. Full! Busy and productive, so, no excuses. I'm grinning just writing this. 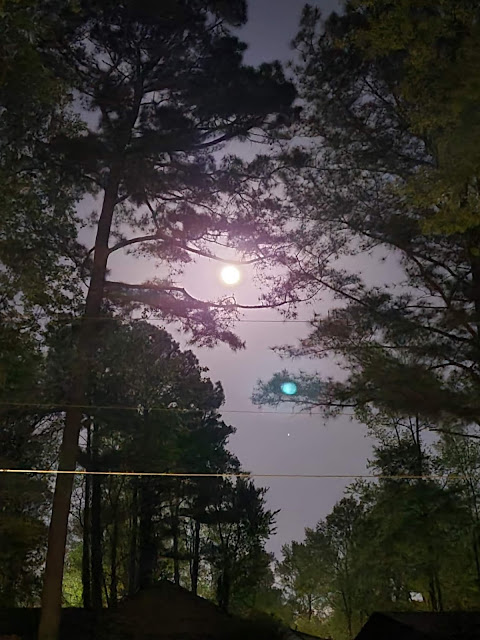 His attitude has moved from pissed off to grudging acceptance.

I will always be grateful for the amazing parks in Gwinnett County.  Some days, the hardest part is deciding which one.  Ten minutes from home, this is our favorite until the weather turns hot. If ever a park needed some mature trees, shade shelters or (gasp) a splash pad or two, this would be the place.

It was windy as hell, but I made do at a picnic table where I could keep one eye on Sonic the Hedgehog and his artmaking when he wasn't hanging from something or swinging on something. 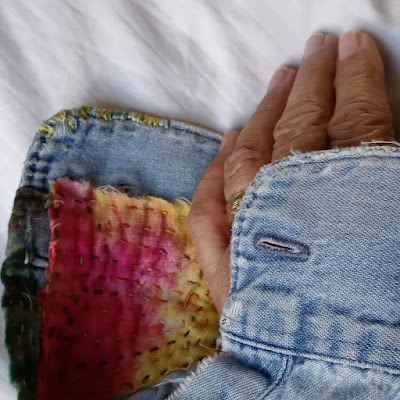 There was a short spell of cold rain that called for gentle indoor stuff while the family went to the movies. 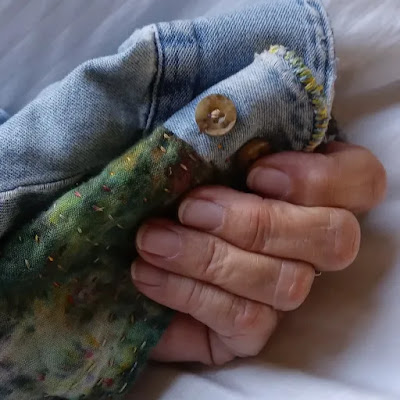 Yesterday they visited Space Camp in Alabama. I love this picture and hate it at the same time. I am severely claustrophobic, and I can also imagine that by the time Charlie is grown, he could just as easily be dressed for work in this picture. 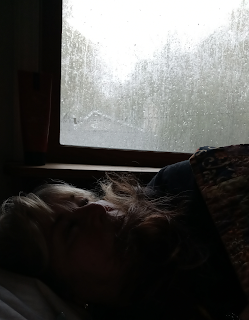 After a string of cool breezy brightness, we are having the Georgia Monsoon complete with thunder and lightning. The kind of day that is good for slow, quiet stuff, like napping.
Overnight, there will be a green explosion. I gave in to the temptation of planting early. Tomatoes along the chain link fence will be guarded by sunflowers and anything that I can get to climb, most likely morning glories.
I liberated a hibiscus from the trash at the big box store. It looked so dead that you couldn't tell what color the blooms were, but the woody stems were still flexible and green. That's joined the perennials up at the mailbox garden. I'm going to put up a three-legged support for climbers as soon as I can find some really tall bamboo.
For the first time, ever I'll have a full sun garden under the kitchen windows. More sunflowers most likely and blueberry bushes. 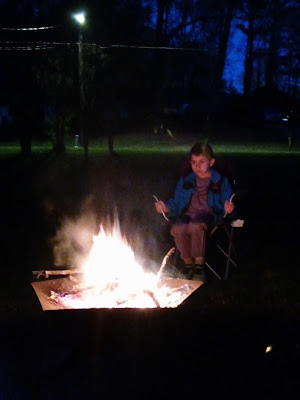 Don't know (or care) what the neighbors think, but we are enjoying the firepit in the front yard, sticks with marshmallows always on hand. I've heard that if someone calls the fire department on you, they are cool if you are having some kind of cookout. I personally think smores are gross, but always volunteer to eat the burned-up marshmallow skins.
A Sunday night routine is settling in. The front yard gets gleaned for deadfall. Jake gets the fire going. Charlie told us the funniest spooky story I've heard in ages. No matter that he cribbed it exactly from a cartoon show. His delivery and timing were masterful. No one had anything to top it. 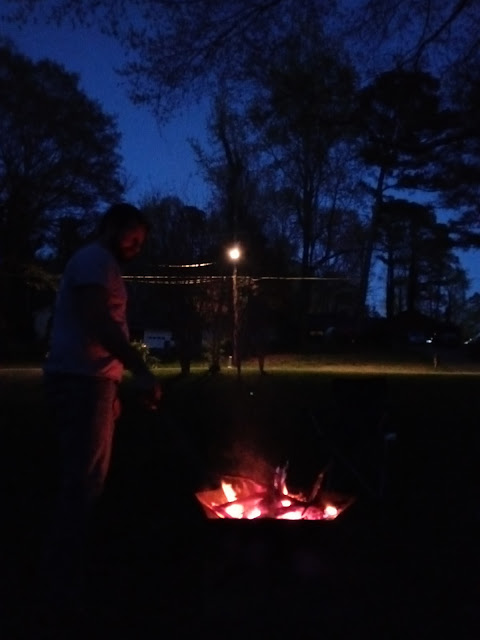