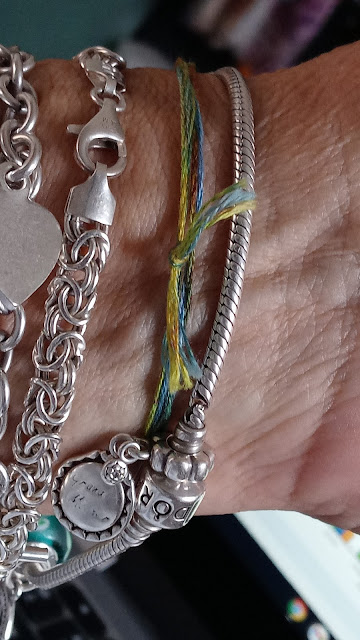 It was so warm yesterday, I cut my sun time short. A scorch was setting in. Mid 70s? The frogs and the other singers around the pool have been tuning up.
But today, it's gone back to the typical cold and damp of a Georgia Spring. Soon.
This whole week has been a slog of graphs, numbers, and waiting. In other words - book marketing. The necessary evil. Took a lot of notes. Learned a thing or two. There is no formula for breaking in with a novel that does not stick strictly to genre norms. It's going to be 90% hard work and a stroke or two of luck. One thing for sure, I won't be doing another promo week until book four is born.
Summer is coming and I'm going to make the best of each day.
I'm not a believer in that sense of the word. To whom does one pray for Karmic destruction to visit greedy, evil, old white men?
This bit of thread presented itself yesterday. Turquoise and gold.
Ukraine. Be strong.
at February 25, 2022 4 comments:

Laugh until tears from one end and pee from the other. That's what I got this morning.

I've been killing curious about what some neighbors are up to behind their house. Where I lived in NY, you had to have a building permit for every damn little thing. Down here, maybe if you wanted a helipad, you might have to grease some palms. It seems like every other house has some kind of shed, shack, or granny pod behind the main house. I have a pool that takes up most of my backyard.

After dark, from my bed, I can see some very strange goings-on a few houses away. As soon as I borrowed Charlie's telescope - yes, I'm going that low - they doused the lights and fires. Away on vacation perhaps? The place is normally lit up like a gas station, but the past few nights, nothing.

So, I thought I'd google the street and get the birds-eye view. I plugged in my own address first to orient my search and this image filled the screen. I laughed out loud and called Colin in for the spectacle. We both couldn't stop laughing. 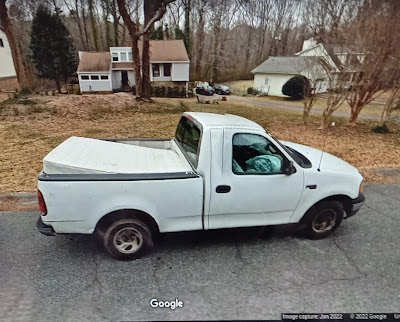 In all its glory, Jim's '99 Ford pickup loaded down with a bunch of crap waiting to go to the dump. It was loaded like that for about two weeks, but only on the street for a day so the rest of us could come and go in the driveway. So, of course, the Google snooper drives by, snaps a picture, and uploads it.
At least I don't have couches and washing machines on the front porch and meth labs in the back yard.
Not a week after this, the poor truck had a serious transmission issue and sat at the bottom of the driveway (blessedly empty) until Jake produced a cure. One of the last coherent concerns my husband had was that I should not sell the truck. No darling, it won't be me.
at February 22, 2022 1 comment:

Somehow I will slip under that heap of pillows and comforter. They will grumble and shift around and purring will put me to sleep.  Outside, moonrise, lamplight, and dandelions. Even as I tried for another shot, the clouds swallowed the moon and we will be in the shit all day tomorrow, tornado watches and all. 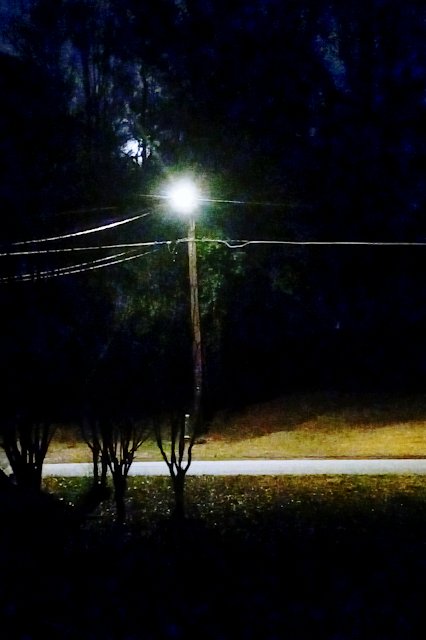 It has been a very long time since I've picked up a brush.  I have brushes that I skipped lunch for a week to buy in the late sixties. The Golden fluid acrylics were speculative sometime last year. Untouched until this morning. I dug them out of the closet when I was putting away the little river basket. A whim. 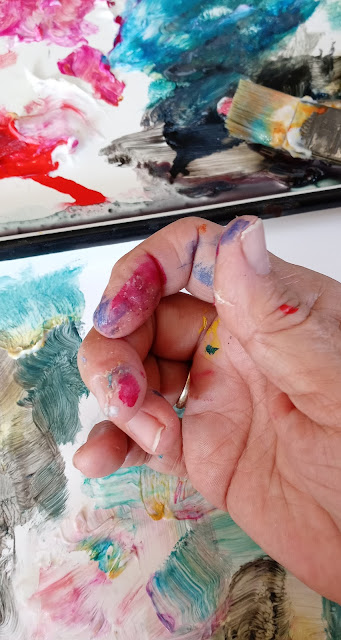 Acrylic paint. The perfect medium for people who are in a rush for results. Why am I in such a hurry? 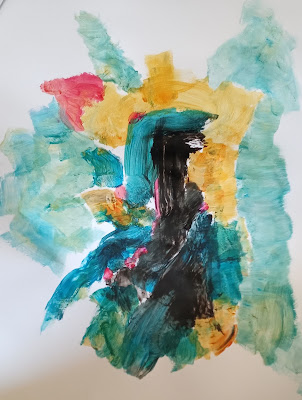 Like cloth, paint on paper can be cut up when it goes wrong. And a lot of it went very wrong.
Dismembered. Repurposed. Like cloth. but faster.
What is my rush? Spring?
Something to consider.
Then, in the rush, the hurry, something emerges. A way of moving the paint. an attitude.
Something that might have spirit. Direction.
I need to remember that I'm still only cracking my knuckles. 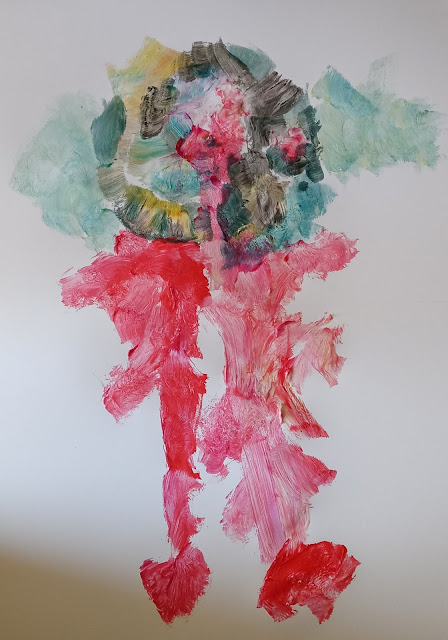 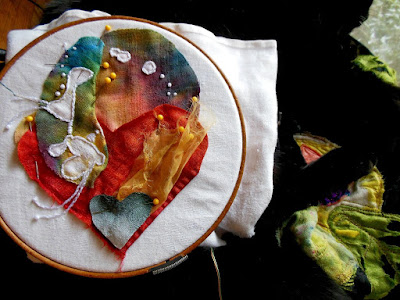 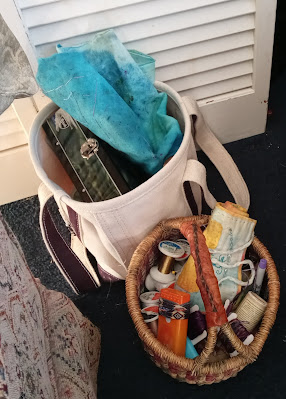 Nope and nope. Cloth, thread, and needles go back into the closet until I'm not faking it. Been down this road (and ruined too many decent starts) to ignore the signs.
I compulsively over-stitched a passage yesterday morning because "the light was so good" or "I was avoiding responsibilities" or any of a long list of doing something for the wrong reason.
And so I spent a teeth-grinding hour picking out stitches that were put in to STAY, as if this would become a wash-twice-a-week baby blanket.
If there had been a shredder in the room, it would have been well fed. 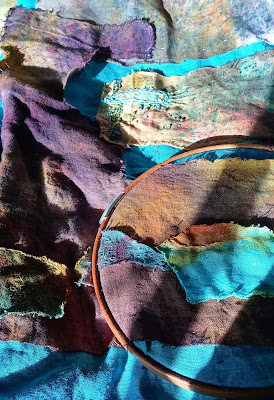 The design was just okay. Rushed the basting just as I predicted I would. There is not enough heart or energy here to keep me in the proper follow-through mode with stitch elements as carefully considered as the shapes and colors of the cloth. I went in Helter Skelter and after this first pass on the light blue, I was lost and floundering.
I don't see or find "things" in my work and I'm always surprised when others do. My eyes look for balance, negative spaces, color edge energy, lines, and movement. Just an old-school abstract expressionist still wishing for 10x20 foot canvases.
It's been like this for a long time.
Next time I pick up the cloth I will machine piece a few blankets. Be useful like cloth.
For now, I have other things on my mind. 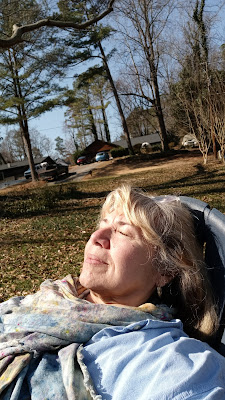 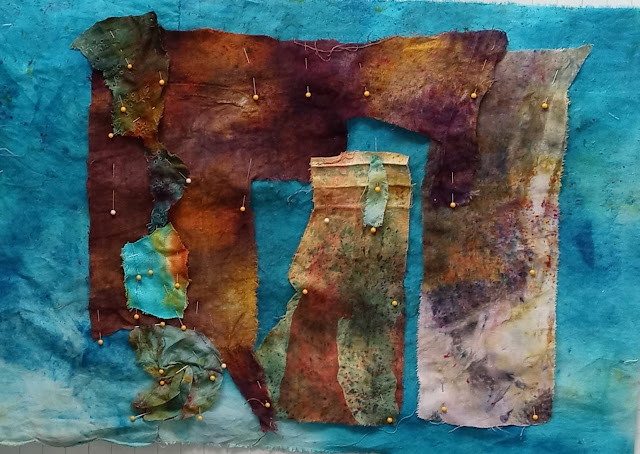 groping in the cold sunshine 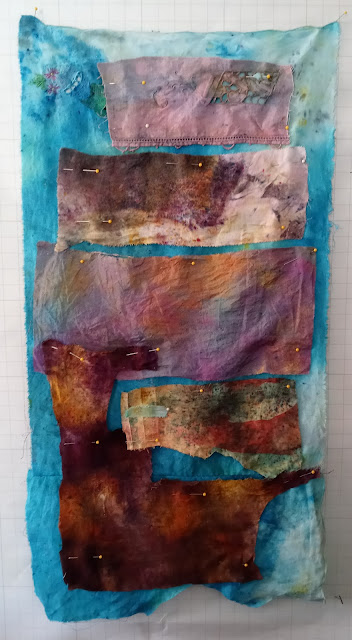 I'm not sure what's more important to me right now. Balance or impact.
These pieces were impossibly scrunched up but I didn't want to find the iron. I washed them in the sink and spread them here and there to dry.
The third piece from the top is impossible to photograph. Silk that is opalescent.
Nothing is going to come of this because I was really looking for a ground to stitch some text on. I'm not even sure what text.
This is not suitable for that so, I'll just leave it there on the wall. See if it has anything else to say in time.
at February 10, 2022 1 comment: 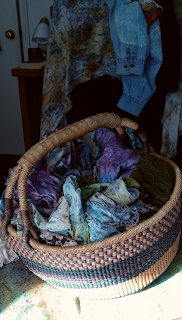 The strong sunlight called me to dig the river basket out of the closet and take a look. See if anything needed needle and thread.

I took a handful of pictures and kept comparing the captures to the real thing before conceding the exceeding blue-ness of my favorites. What was that about at the time?

Anyway, I was about to pull everything out of the basket when the phone rang.

Shorty and his sore throat needed to be fetched from school. It was a good day to watch a lot of Larva and We Bare Bears. I drew the line at Pinky Malinky. They talk too much.

I am so glad to be able to do this. 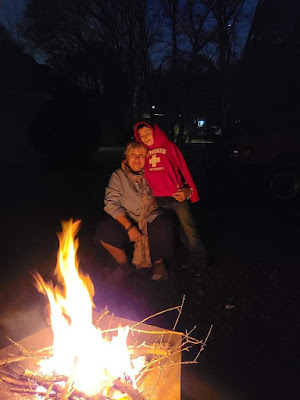 In the shuffling of stuff, my thread box got dumped. It was overstuffed so it was more like a spew.
Sorting the colors threatened to give me a headache. The colors I gravitate to rarely fix in once camp or another. What I know to be true - how they look on the skein is far from how they look in a stitch. The variables are too many to count.

This tray got more consideration, beautiful blank slate that it is. Got a thorough cleaning for the first time in memory. Jude, you may have had one like it. At SVA, a painting teacher encouraged us to get this large enamel tray and give up the romantic notion of the quaint wooden pallette with a hole in it for your thumb. He was right.

This tool has Served valiantly. Beyond art, it has brought meals to bedsides and even did a short stint as a sled. Now I think of it as the Make Tray. Yesterday it staged a Lego project. 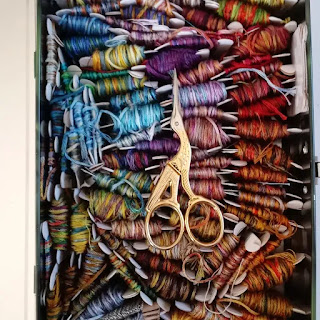 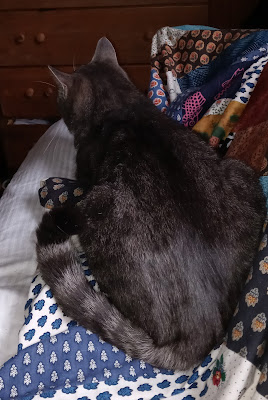 They make sure I get my rest and keep me company. 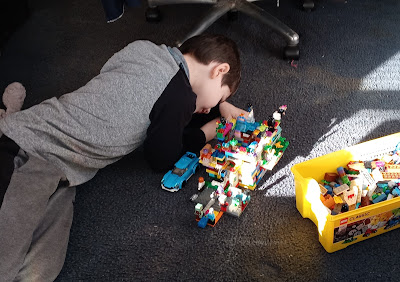 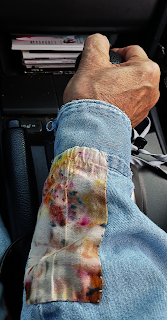 Getting past a 6:15 alarm and the hustle of coordinating Charlie and his gear for a ride to school, I'd forgotten how much I like driving into the sunrise. We chit-chatted in anticipation of my first ever Car Rider drop-off, but the timing was perfect and it went off without a flaw.
On the drive back I fell into the years-old routine of asking myself a question about a scene then letting answers come with the miles.  It never fails to produce results that just don't seem to come when my butt is in the chair in front of a computer. Stop-light notes scribbled on junk mail and receipts get it done.
at February 03, 2022 2 comments: