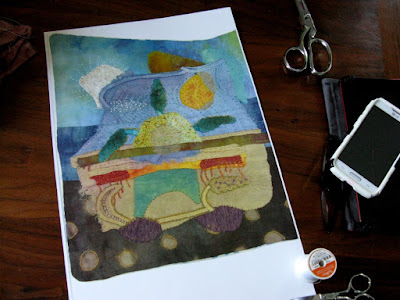 I've been packing up the last harvest in baker's dozen bundles and getting them shipped off.  There is not as much of this cloth as a half day of ironing lead me to believe.

The light at the end of this tunnel shines on everything in the studio and has kindled some interesting thoughts.

The zeitgeist of the publishing threads that have floated by my screen recently has been about cover art.  At the most recent writer's group meeting, there was some talk of the experience of holding an actual book as opposed to some e-mode.

To me, it's like the difference between champagne and distilled water. It's all about how many senses are engaged while the story takes over your life.

While I was looking for something else, I found a folder with some of the reprographs I made a few years back. I've been cutting them up into postcard sized pieces and using them as bookmarks. They are just the right weight and size and the backside plain paper is perfect for taking notes.

Fortunately, I leafed through the folder before I cut this one up. It's the last and the original was sold. This print is all I have left.

After looking at dozens of "BEST BOOK COVERS" according to I don't know who, it occurred to me that I have all the cover material I could ever look for right at my fingertips and should I not find something suitable, I can thread a needle and make that happen too. 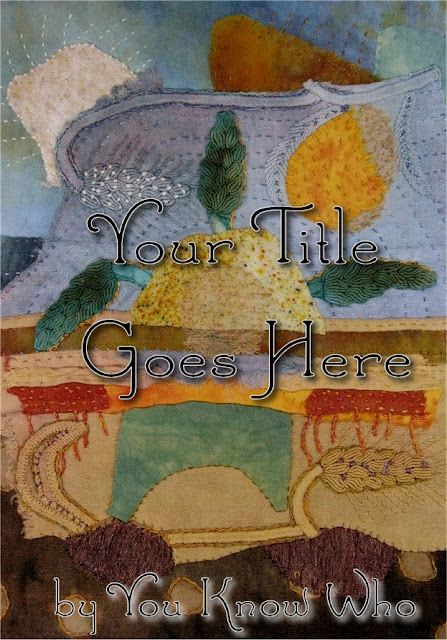 "just going" with the last harvest 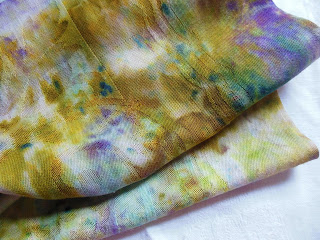 To that end, I decided that the last two harvests needed to be showcased, so I did the unthinkable! This morning there was IRONING!!

I always tell my customers to iron the damask scraps before they decide how to use them because the heat, steam, and pressure brings out an entirely different character inherent in this cloth. 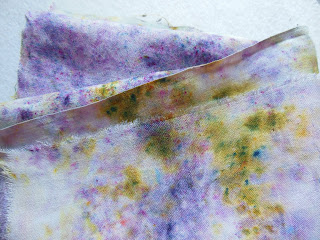 Using the first morning light through my north window I've done my best to capture some of that character. Iridescence is very difficult to capture digitally, but I think you'll understand. You can click through most of these pictures to some very large images.

I confess I was thinking about something else altogether while I was ironing. (If you don't do that yourself, something is wrong.)

All will be available here while they last.


Proceeds from all this glory will be funding a trip to my first writer's conference in November. Yes! I won the scholarship, but there's airfare, lodging, and even writers have to eat!  It's a big step in a different direction, something I'm very excited about! 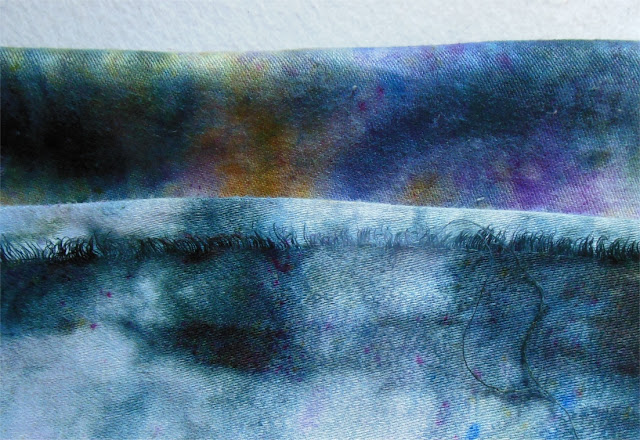 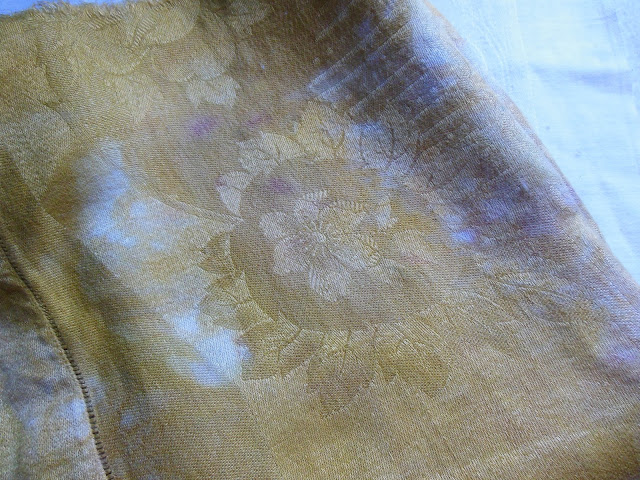 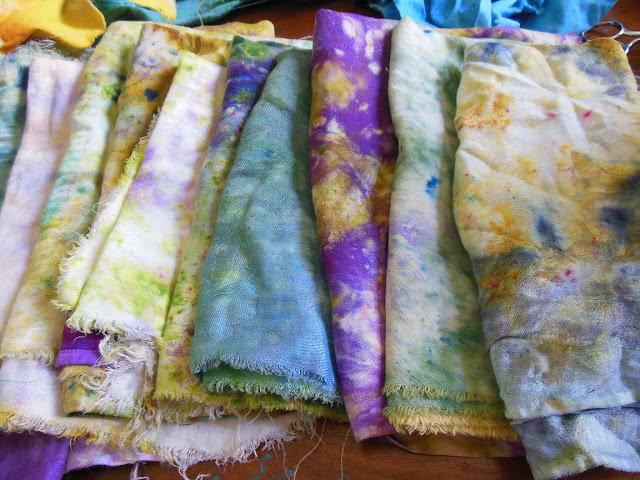 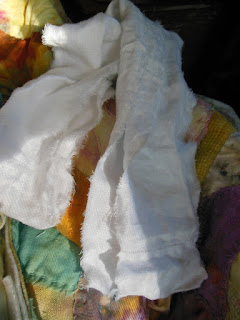 That dye session was quite impulsive yesterday. I haven't reflected on what possessed me given the general lack of planning and state of unpreparedness. Still, it's done and over.

Everything has been rinsed, rinsed and washed and is tumbling in the dryer right now. That mechanical cat purr makes me want to curl up and go back to sleep.

I don't know what this batch will be like after the machines are done with them.

I cut/ripped this strip of vintage damask from a large table cloth as I was getting things ready yesterday. I tied it around my forehead to keep the sweat from getting into my eyes. In a lifetime of performances, this bit of cloth served well one more time. 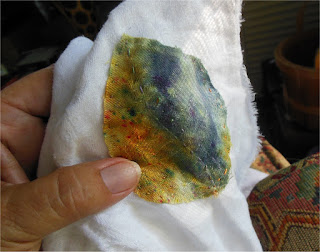 This morning I'm marking it just a bit to commemorate my last dye session.

Although things have been turning out beautifully and have been well received by people wanting the cloth to incorporate into their own art, I finally have to admit to myself that the passion for doing it is gone. We all know that work without passion is just, well, work. 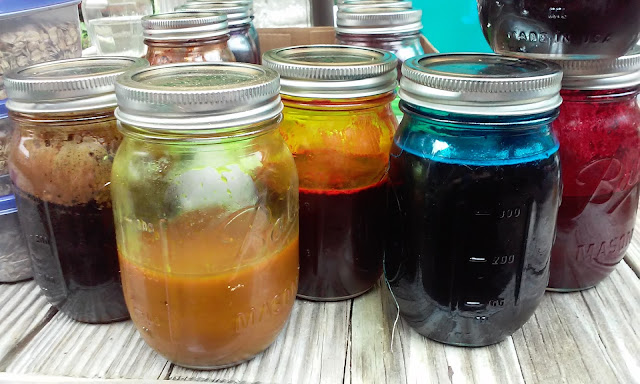 I've been sorting and straightening in the studio and came across a big basket of things waiting for dye and some wretched things just dying for another chance at color. It's hot and murky out, so why not. The dye deck has been a mess so a hasty clean-up was necessary, but I powered through most of it before falling into the pool.

I pulled a couple of pieces out of the soup late in the day and it looks like the dyes, even though they've been in the house, have lost a lot of their kick. Nuff said. Rinse, wash and dry tomorrow.
at July 23, 2016 No comments: 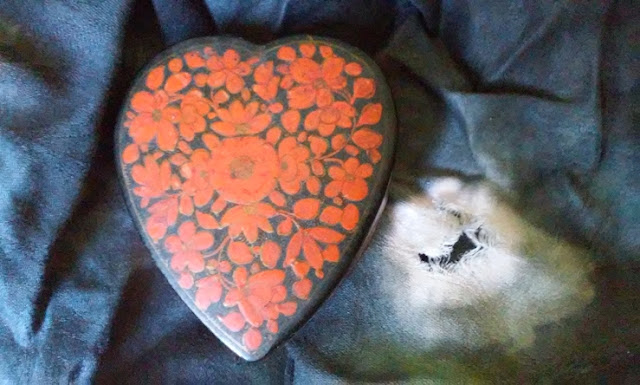 There's nothing like a long heart to heart with an old companera to get a fresh set of eyes on things. I can only hope the good was reciprocal.

Time passes and a weight has been lifted, and the way is clear for great and wonderful things. Nothing like giving oneself the gift of a good reading. 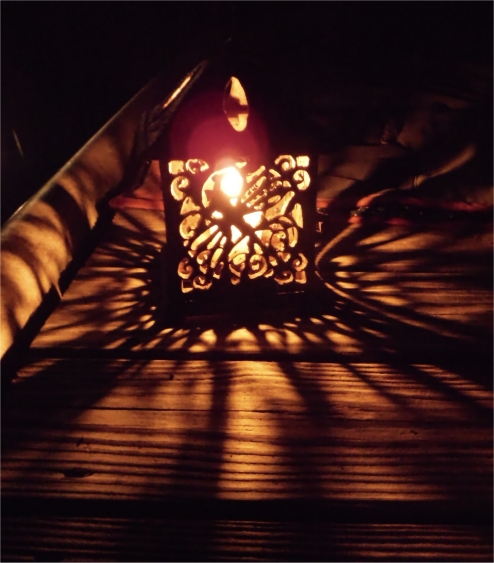 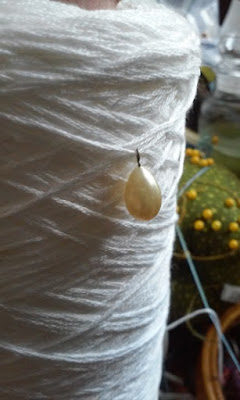 When you start seeing random images of things in an around a studio, it's a pretty safe bet that nothing much is going on.

I started another one of those little flings today, just to get the cobwebs off the machine. And yes, hands, fingers, and feet seem to be remembering production work. 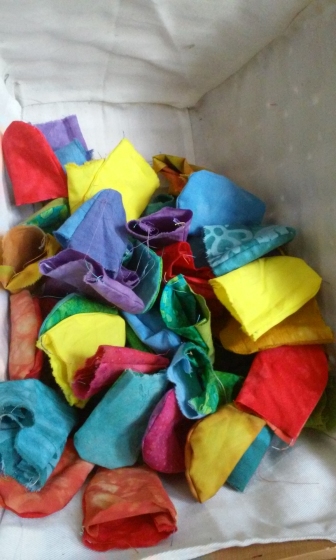 The Real Reason Why Kids Refuse To Go To Bed.

I am planning a quilt based on the Truth (as I perceived it) behind a common childhood prayer. You know the one I am talking about... I can clearly remember thinking "If I should WHAT before I wake?? Wait just a minute here...". And then, if you forgot to bless someone you cared about at the end, they would die. How could a kid sleep with that kind of anxiety??

My solution to dying or being killed in my sleep was to NOT sleep- willingly, that is. I can remember every single detail of the view from my top bunk and when we moved to the house in the suburbs, I would creep down the hallway and hide under the lace-draped dining room table just behind my parent's field of vision and watch TV until after the Tonight Show. Something about Johnny Carson made me feel safe. And he looked a lot like my Dad.


I spent some time sorting scraps this morning, setting these aside for a gift. The phone rang and I was gone from the room a few minutes.

Cloth. A world of purpose. 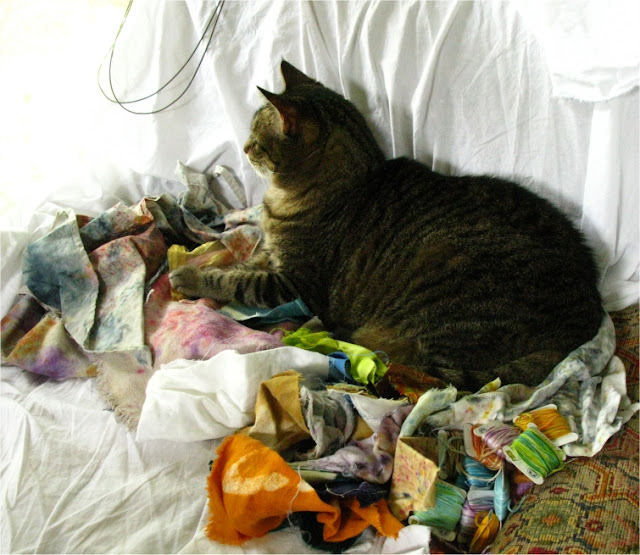 holding on to serenity 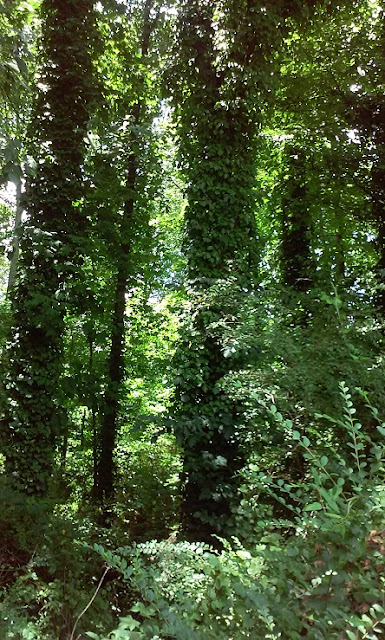 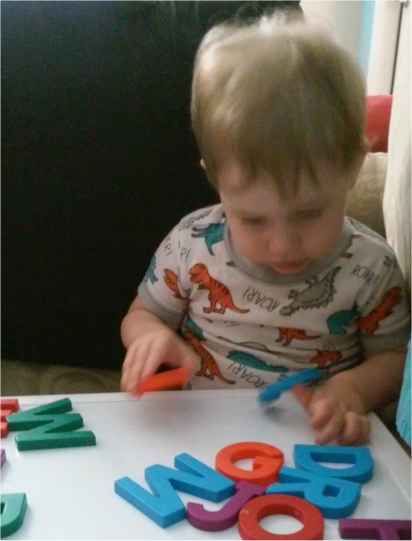 The events of the week, national and personal, have been enough to make me want to sign up for a stint in an opium den. Can't stitch, can't type, can't write or read three lines in a row without dropping the reason for opening the book.

I don't know why, but at some point this morning, I tried to say the Pledge of Allegiance. I got to the second phrase “...and the United States of America” and... nothing. The problem is that I learned it before they slipped the God business in there. The anticipation of the gap was preying on me. I was never able to stay in sync with the rest of the class, always finishing ahead of them. I had one teacher scowl and call me a Heathen.

Fearing early onset Alzheimer's, I tried again with something simpler with deeper roots. “Now I lay me down to sleep. I pray the Lord my soul to keep. If I should die before I wake..” that's the one that kept me from getting a decent night's sleep from the time I was two or three when my aunt, grandmother or mother sat chanting that to me at bedtime waiting for me to join in. I never did.

“If I should die??? wtf?” Problem solved. Do not close your eyes. I don't think I willingly fell asleep until collapse before I was a teenager. Not to mention that whole 'bless this one, and that one' and so on, because if you missed someone, they were dead meat. It wasn't too long before I would deliberately leave someone off the list if I was tired and a looking forward to tomorrow.

My mind properly misdirected with pious drivel, I took another run at the Pledge. I made it to “the Republic” and again, the yawning silence.

A little voice inside my head said, “We are so fucked up.” I knew that voice. You can always count on Jiminy Cricket for the truth.

“Do you think I'm a damn vending machine? You put your money in the plate and I fix everything to your satisfaction? Nah! I'm done with your stupid shit.
You'll have to solve this problem on your own. The lesson endeth here."