I'm up in there just to the right of the window, working. Will be at the stroke of midnight. Hopefully, it will be a quiet night. I have opted to work on New Year's Eve for many years. No extra pay, since it's not a federal holiday, but it keeps me busy. Keeps me from brooding.

Jimmy and I almost never went out on the Eve. I'd never been to Times Square for New Year's Eve and he warned me that unless I was up to peeing in an alley in sub-zero weather with ten strangers cheering me on, I wouldn't like it.
The last time we went out on New Years was a toga party in the late 70's before the kids were born. Who gives a party in New York, in January that calls for wearing bedsheets? The company was strange, the drugs too copious, and the next day, we were both just grateful to have arrived in the new year alive.
After that, our celebrations were cozy and private.

My broodiness around the New Year stems from my parent's ongoing war. They always called a truce a week or so before Christmas, but I could be sure that the hostilities would resume on New Year's day or soon thereafter.

Back when they still entertained guests, I could tell the next morning what the day would bring. If the ashtrays were all emptied, glasses collected and washed, kitchen window left open to air the place out, I knew that my mother had been grinding her teeth and seething over the work alone rather than retire. It often seemed that the old man would appear mid-morning, having been elsewhere overnight. 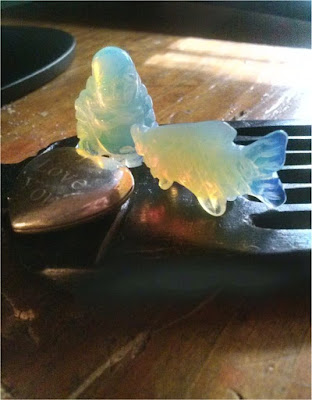 So, through the years, I busy myself with this pass of hours knowing that the new day will bring business, as usual.

But these days, changes - new attitudes, new directions, progress of any kind - are entirely up to me. 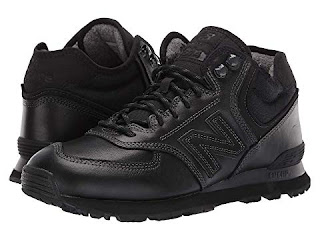 No text after all. 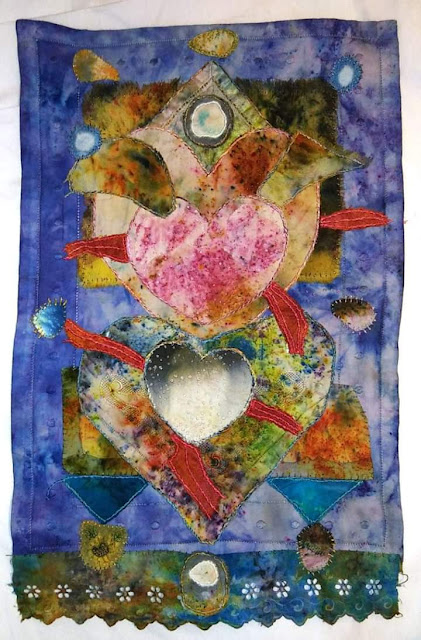 "It's the heart that makes the heat"

Except for something to protect the back and a maker's mark, it's finished.  20"x13".


The title is taken from my novel in progress. Jack is infatuated with a married woman. He thinks he's giving himself a good talking to, but he's actually listening to a ghost.

Jack took a deep breath and submerged himself, water slopping over the sides of the sink. The music distant, his heartbeat close. Cooze is cooze...but you know she’s different from all the rest. You know how, but you won’t know why unless she tells you. It’s not up to you anymore because it’s the heart that makes the heat. He lifted his head back out of the water, wet hair plastered down over his face, coughed for breath and said,
“Awright, Jiminy Cricket. Awright. I fuckin’ heard ya.” 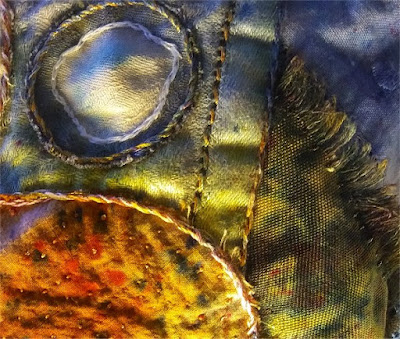 I'm still working on this little thing. It hasn't yet called for help even though I spent about two hours yesterday stitching text to it only to spend another chunk of time picking those words out.

I won't be happy with the text until I can get it to look like Heather's...so it looks like I'm going to be cranky for a while.

Our Christmas was small and sweet and I, for one, am glad the holidays are over. 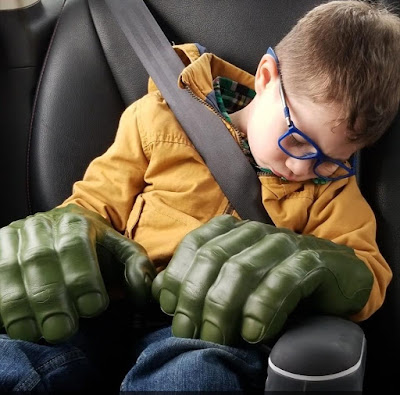 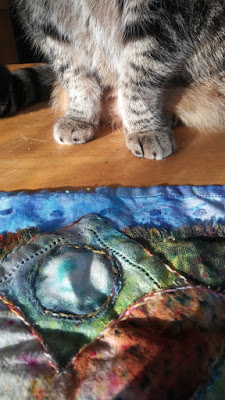 I started early this morning before the coffee even came down. Working on this while I also work on a writing problem.

The solution(s) have come, one grudging word at a time, so I'm not sure this brain trick is as good as putting on the boots and covering some ground. That used to work so well.

The old boots are coming apart. They are a trip and fall waiting to happen. Time to break down and replace them. I'd given up shopping brick & mortar for new ones, then I remembered to look at the tongues of the old ones. Size, model, all there. Zappos? Check. Order placed. 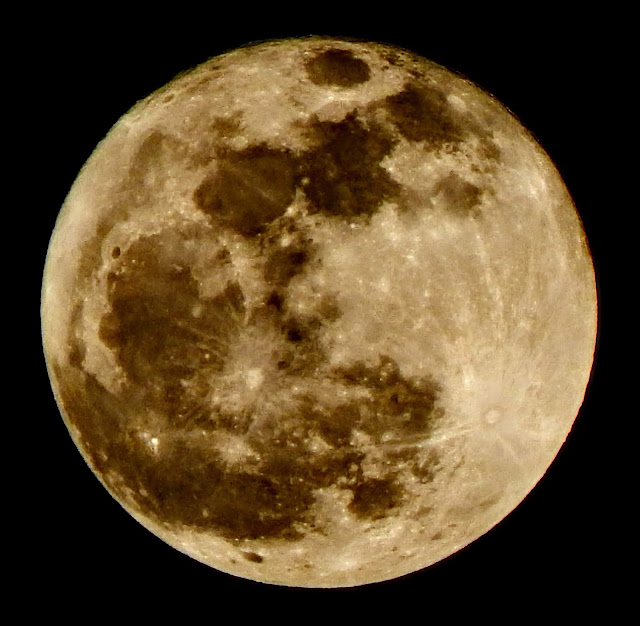 I suppose if I had a tribal elder telling me, "Today is the shortest day of the year. 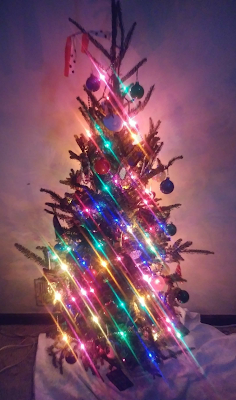 We must do X, Y, and Z!" I'd be the apostate whining "Why? It's cold, dark, and it's been raining all day!" Now I have everyone in the ether going on about it for me, so no worries here.  Solstice? I've been hard put to catch any kind of holiday cheer up until today - too late to trust anything to the post office. So I'm declaring a new holiday - "You'll be surprised when it arrives!".

It's been a week of the blues and slackology for House Lacativa. Our traditions unraveled in the past few years. It's just the way it is, except for the little bright spot in our lives. Getting just the right things for Charlie, not going overboard, has been fun. 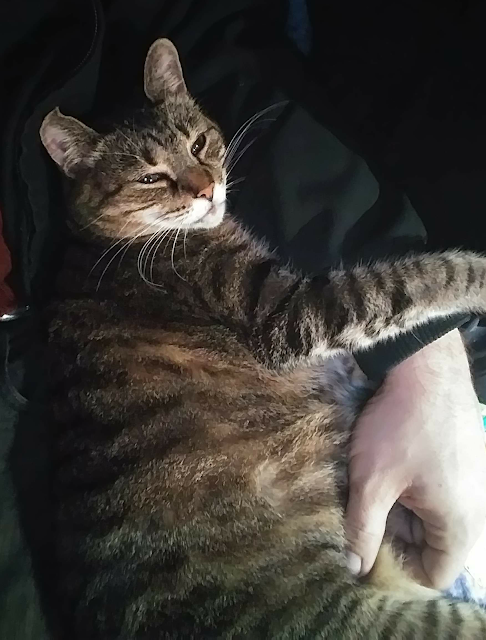 In all her years, Sweetie never did anything dastardly to the tree. It was likely too much trouble.

There are no pictures of the highpoint of my day. I left my phone in the car and I'm kind of glad.

I took Charlie to his new favorite place, 2nd & Charles. Among many other delights, they have an area with cushy seating and six-foot TV screens where you can play video games. The store holds your driver's license and gives you the game controller. I got one, Charlie and I were all by ourselves, everyone else in the store hell-bent on shopping.

He had never played a video game before but was familiar with the Lego character on the screen. It was both harrowing and delightful to watch him try all the buttons and switches to make something happen on the screen. He was really Ready Player One!  After about 30 minutes, I called time and he willingly gave up the controller, but the kid had been to Wonderland and I was the instigator and witness.

And this truly set the tone for my day, before I even got out of bed. It feels like a Christmas carol to me.
at December 21, 2018 3 comments:

Due to everyone's work schedule, each morning I get Charlie up, fed, dressed and drive him to school. Our routine is tight, a comfort to him and a blessing for me. On Tuesdays, I go back and pick him up in the afternoon. 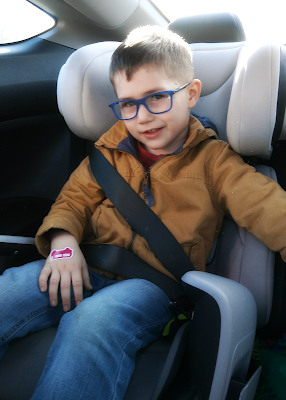 He's learning that having a great day at school is happy business.  It was in the mid 50's this afternoon and we pretended it was summer with a picnic and stitching in the park. A gem of a day. 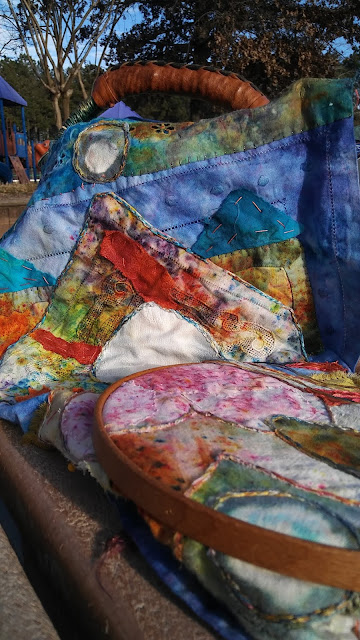 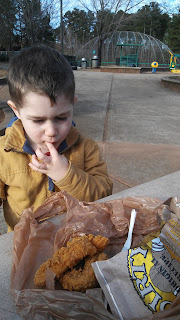 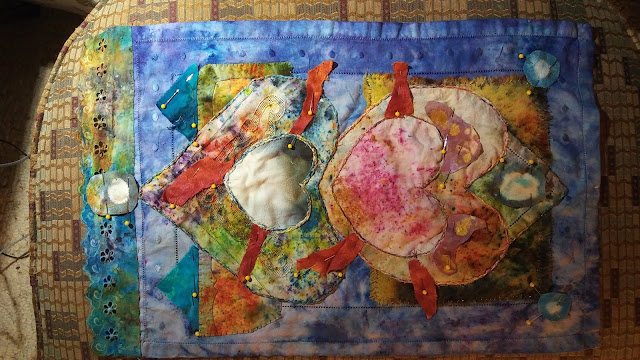 I was supposed to be doing Christmas cards and getting packages ready to go. Things got out of hand. Once Bruce hit the stage I was done.

This show was so excellent. I had closed captions on out of habit. The lyrics to some songs came as a great treat. Revelations! 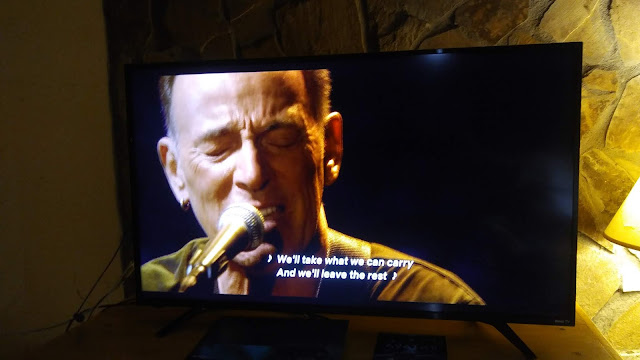 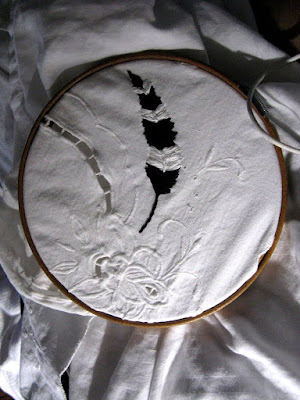 I was rummaging in old image files for inspiration. Instead, I got this clear, strong message. No stitching for the sake of doing it.

Intent, purpose, is necessary for the form, the results, to matter. There needs to be a course to get out of the harbor, only then can a sailor wander.

More images from a lost archive. Date approximate 1930. My aunts Phyllis, Vera and my father, Charlie. The horse is either Tom or Jerry. My grandfather plowed snow from the streets of North Castle, NY with his team. Cut the grass along the roadsides by hand with a scythe. He taught me how to sharpen it before I was big enough to hold it properly. 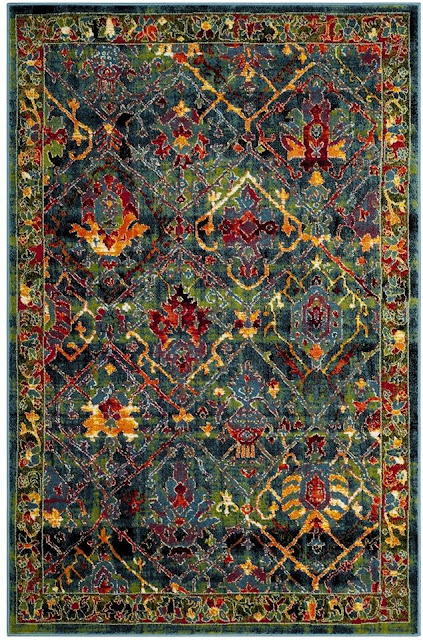 I'm no interior decorator, but this piece - it's colors and vagueness - has captivated me.

People have decorated their whole houses around less, I'll bet. 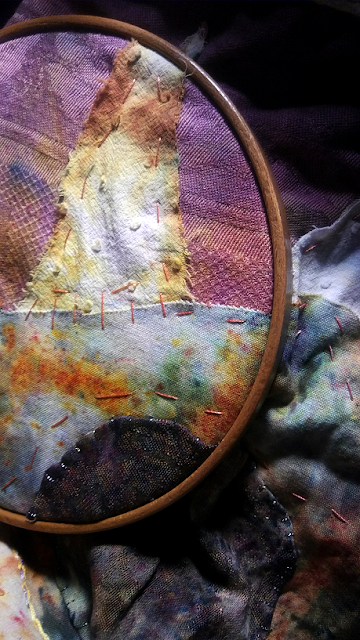 this is another one. cloths popped up that wanted to play but the other one was already busy.

I'm still thinking about what words I want to use. that happens with another part of my brain that needs some rest right now.
at December 08, 2018 3 comments:

too fussy. too neat 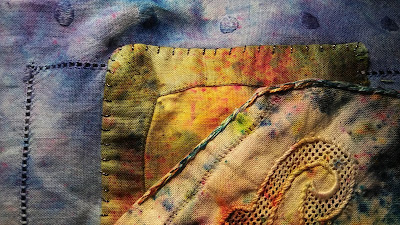 Things are too tidy. I need to loosen up. I'm thinking there might be text. Something raucous, bawdy. Sprawly. 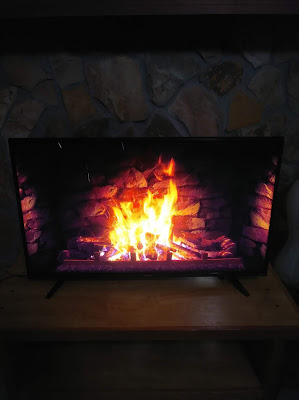 And today, this happened. We have been without a decent TV for some time. Set this one up right in front of the fireplace that never gets used.

I really, really want to see Bruce Springsteen on Netflix next week. For now, this video of a Yule log will warm us.
at December 07, 2018 3 comments: 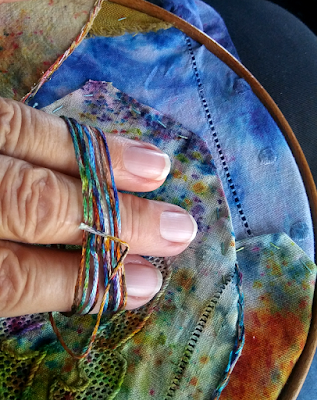 It's nice to fool with my own Dirty Thread. As you can see, I've kept some of the tastier ones for myself.

This one seems a perfect fit for this project. But what did I say about going slow?  After the first length was used up, I got hasty and tried to use all six ply + two strands of bright blue rayon (wayward shit on a good day). Snag city, each stitch a pain in the ass.

So back to splitting the six and doubling each half, adding in whatever silly business I can cram through the needle's eye as the mood moves me.

and don't forget a slash of Thread Magic. Strange and wonderful stuff.
at December 03, 2018 6 comments: 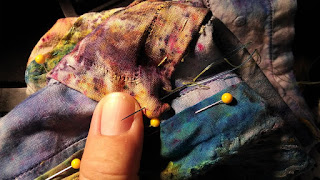 I turned off that part of the brain that plans, plots, nags, and worries. Took my medicine and stayed in bed. Mostly. The cold realized that I was an inhospitable host, packed his shit and left. 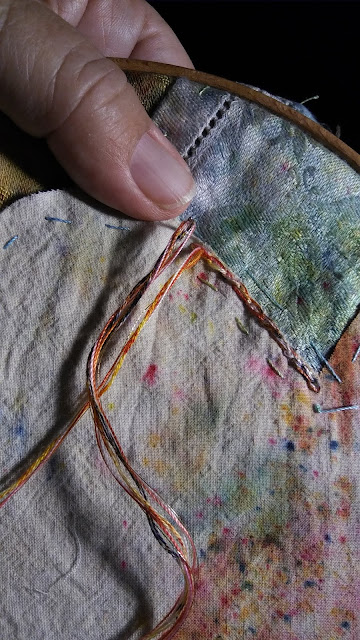 while I was laying around trying to ignore the cobwebs hanging everywhere, I pulled some cloth and thread from the river basket.

After a few false starts, I think I have something that speaks to me. Time will tell.

It's been a long time since I've built thread. Slowly is it the key. It didn't show up in this picture but there's a gold metallic in the mix to keep me in line. 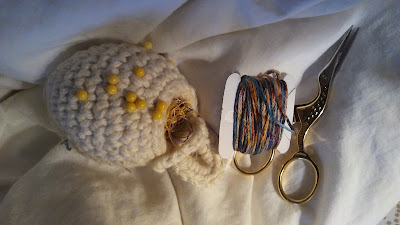 In bed with a cold. Just examining things.

What sucks about working from home is, if you can't drag yourself to the chair and log in to the system, you should be in the hospital.

I'm not thatsick . It's only a cold, so come 3:30, I'll take another round of Alka Seltzer for colds and be in that cottony place for a few hours.

Right now, feeling the comfort of the familiar. Cloth, thread, and Meet Joe Black on TV. 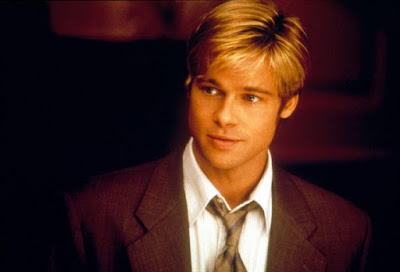