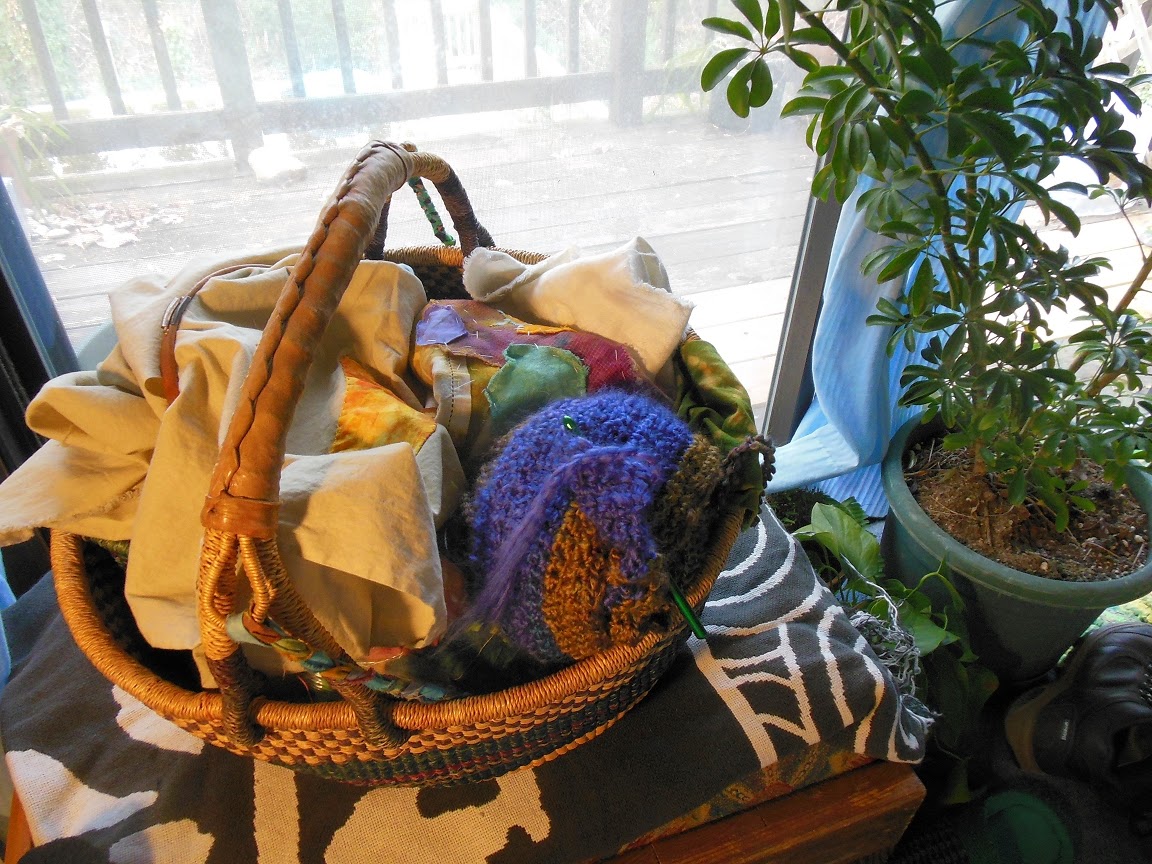 The river basket is stuffed with WIPS these days - gifts, practical matters and a little piece of needle dreaming.

I've been spending a lot of time writing (,,,nothing to see here,,, move along) and thinking about how things are going to be different here at House of Lacativa in the coming year. Changes upon changes.

I have never shopped Black Friday, just refuse to take part in practice. If I've lived without something all year, and managed quite nicely without it, why would I rush out to some rude fest to spend money on the thing?

What  I do have are LOTS of fat baggies of  hand dyed, vintage cloth  if you are in the mood to treat yourself or someone else. I can ship on Tuesdays or Saturdays right up until Dec. 16th ...I'll go again on the 20th but no guarantees this will make it in time for Christmas. 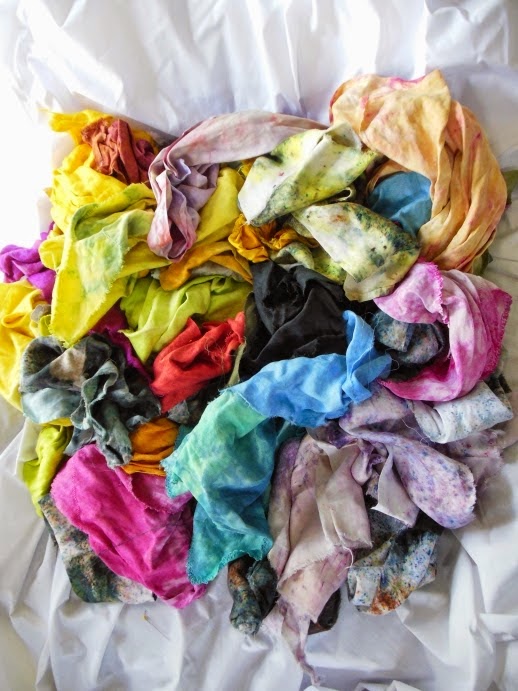 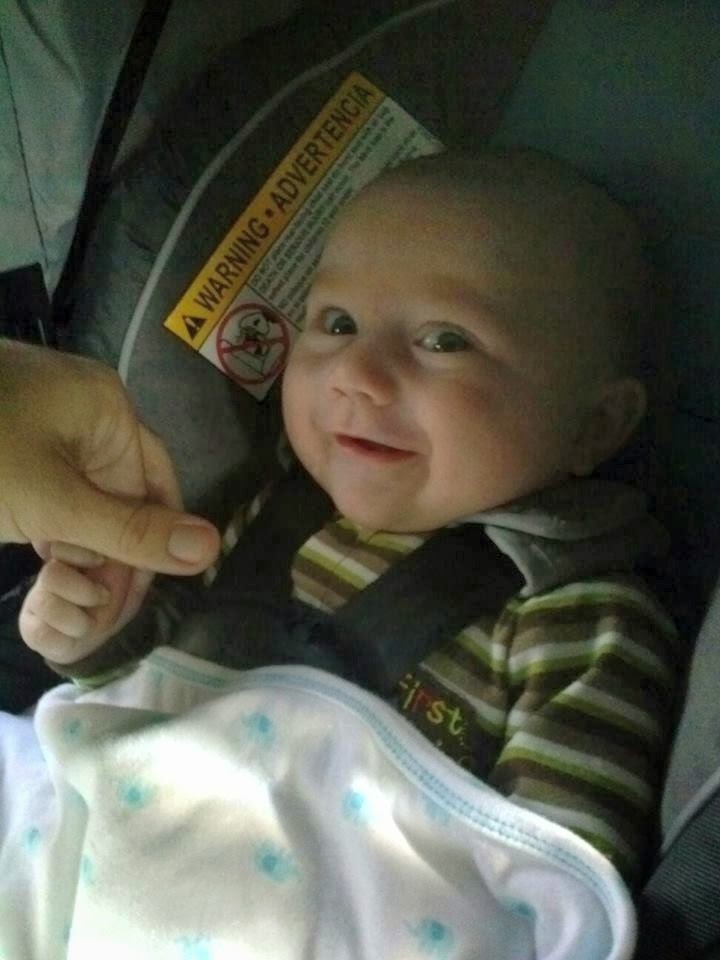 We traveled again this year. Colin and I went with Jake, Missy & Charlie up to Abbeville, SC to spend the day with Missy's mother Cookie and her husband Bob on their farm.

It was nice to do something new and different for Thanksgiving. This year, though, I had a turkey and all the fixings ready to go into the oven at home on Black Friday so we'd have the beloved leftovers.  Nothing sadder than coming home from a family feast to cranky cats and baloney sandwiches.

The farmhouse itself was built in 1775 and is steeped in history. There will be a lot more about this place in the future.

I got to meet their horses and neither of them took exception to me as I made it clear to them both that I was not there to ride either of them.  Just a little meet and greet and a good scratch and I have two new friends. There's only this one picture of Charlie riding in the back seat with his Mom and Colin.. I left my phone in my car and all but forgot I had a camera with me. Just wanted to take it all in for a change.
at November 28, 2014 5 comments: 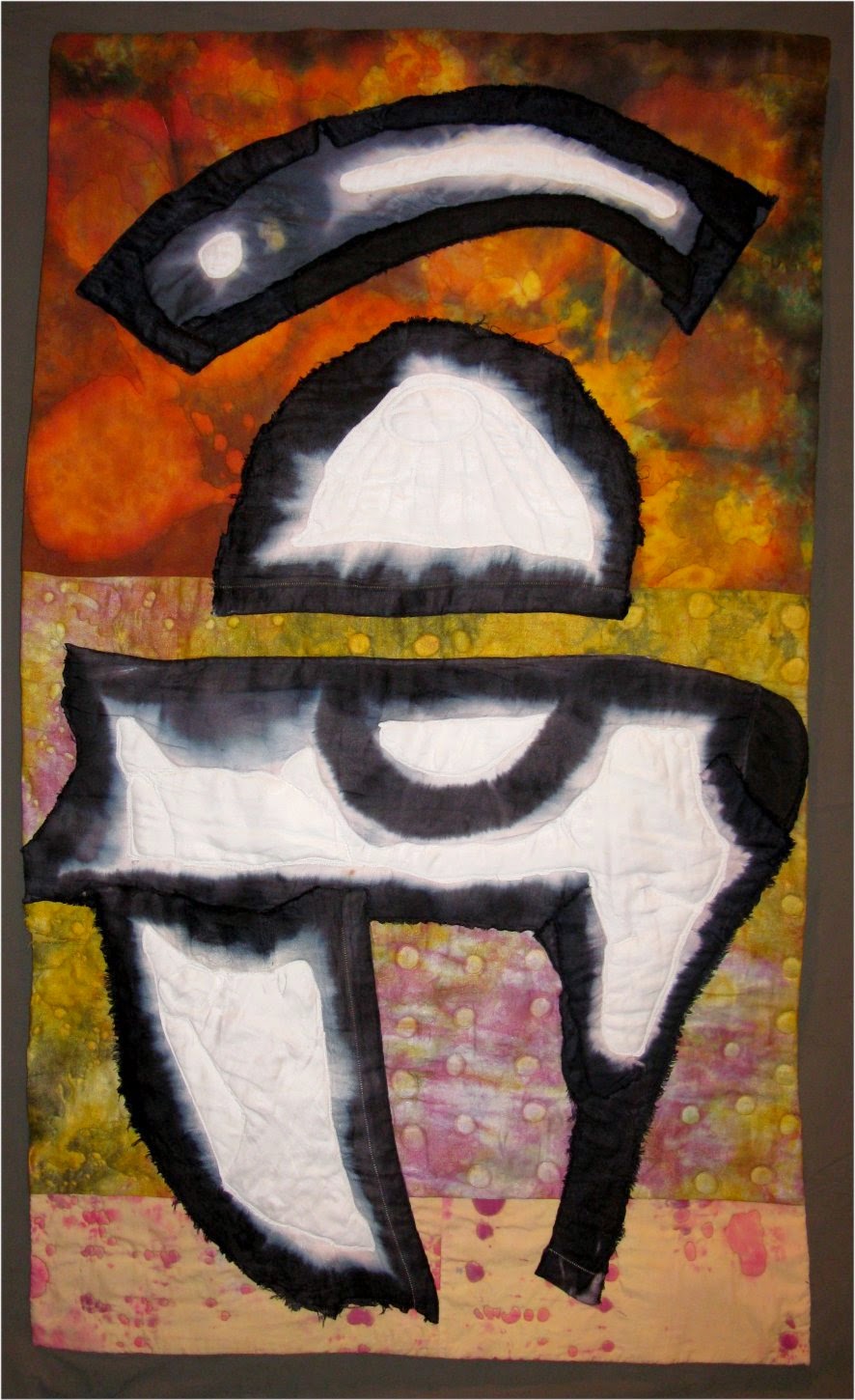 Since nothing much new has come out of the studio lately, I thought I'd scroll back some and look for some inspiration.


As soon as I paint my office,
I'm going to start hanging these older pieces, one by one.


It's for sale, of course. Email me if you are interested,

A days worth of doing before noon 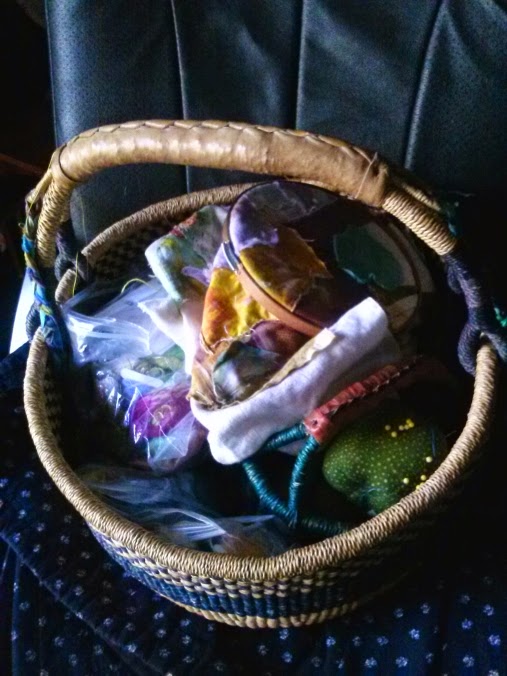 One of those days where getting up early paid off nicely. Made  my lists, hit all the stops and  had all the "gottas" out of the way by noon.

All but one...get a replacement zipper for my fleece jacket. This meant a trip to Ho-Anns and me with no coupons. Oh well, it's only a zipper, right?

The crack was there ready and waiting.
Calicoes and batiks for a smaller quilt for Charlie, big fat cushy skeins of Lion Homespun and a J hook, just in case I couldn't find one of the five or six I have somewhere in the studio.

Not much later I had a visitor for a little while, but I don't think he'll remember. 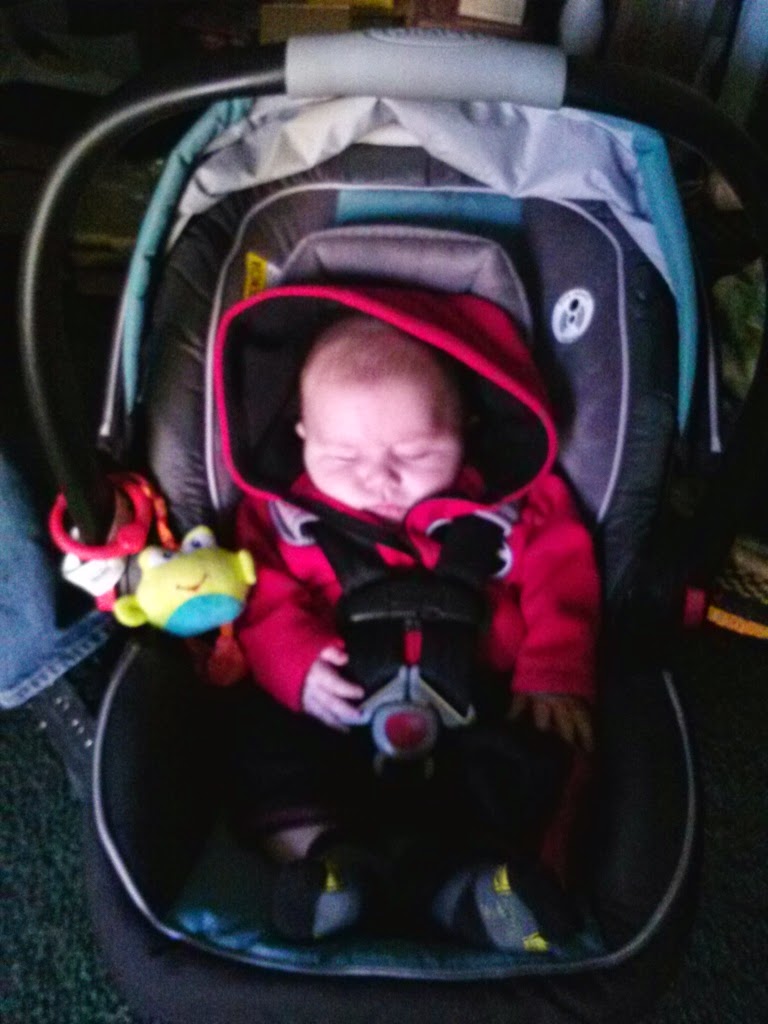 Later, I put in eight hours in the whine mine  and still had energy to burn, in fact, I was up writing until nearly four. That was the real cherry on top of my day.

The cat crew insisted on breakfast at eight, so another early start only today dawned gray, raining and thunder rolled from time to time.

a day taken out of time 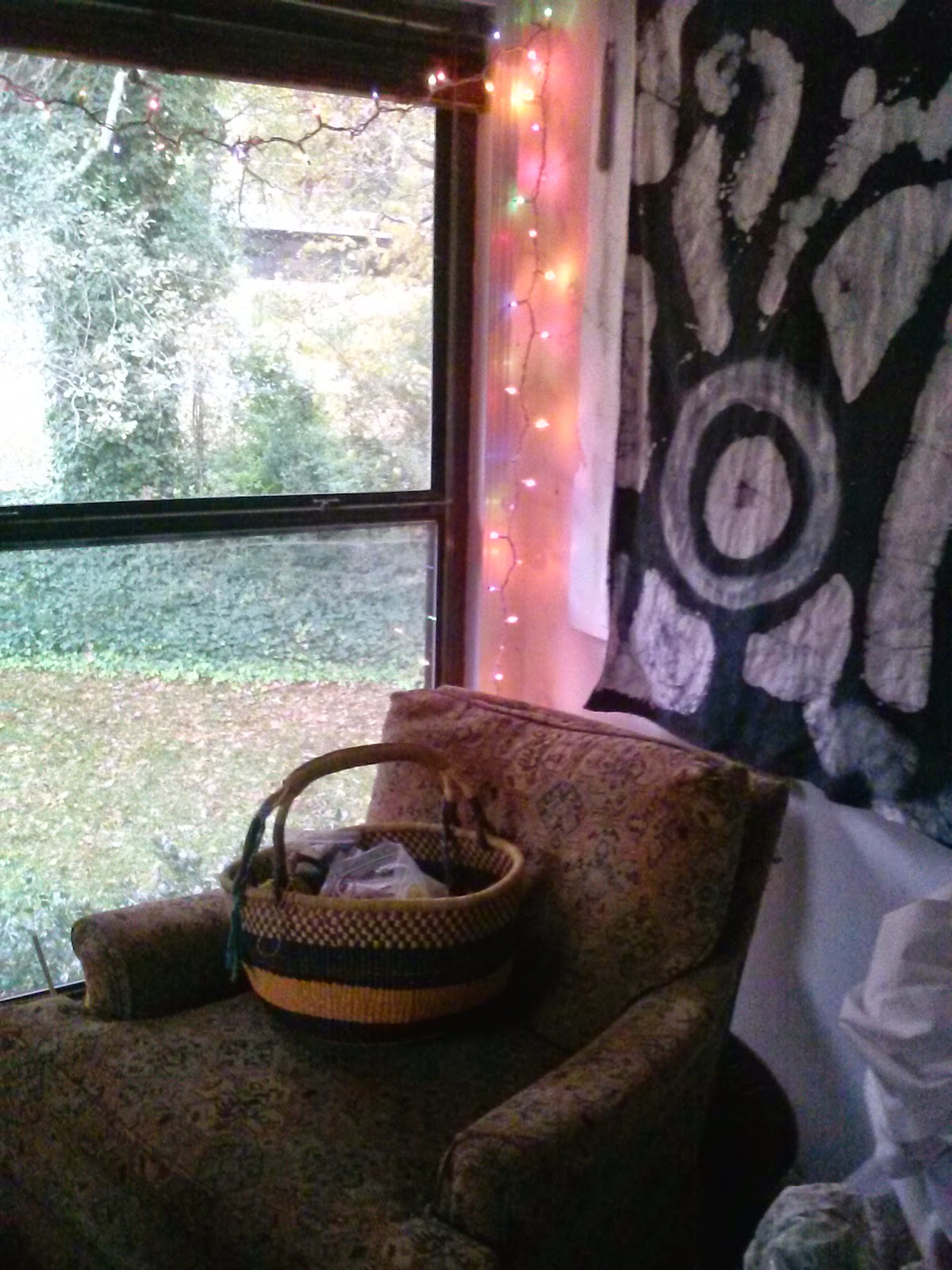 Yesterday was a strange day. I never got dressed or left the house. I cleared off the stitching chair in the studio and sat with the cloth for  a while, but it was absent-headed fiddling with no intent and the results showed. An hour of stitching equalled another fifteen minutes of picking out. No surprise. The film "Giant" was a colossal bore and complete waste of James Dean. 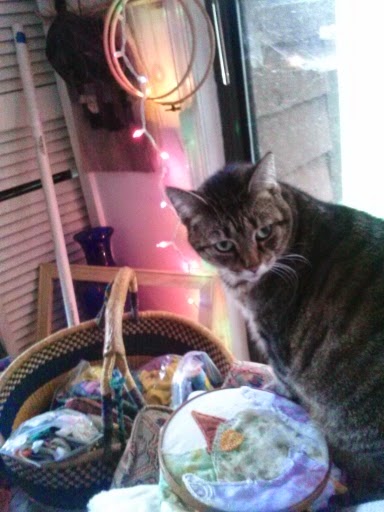 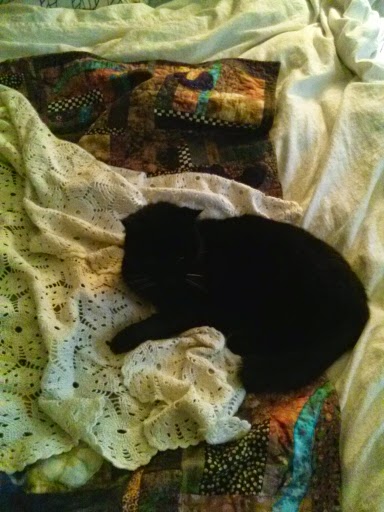 Some stitching, some boring TV, some napping, and for me,  some dreaming. 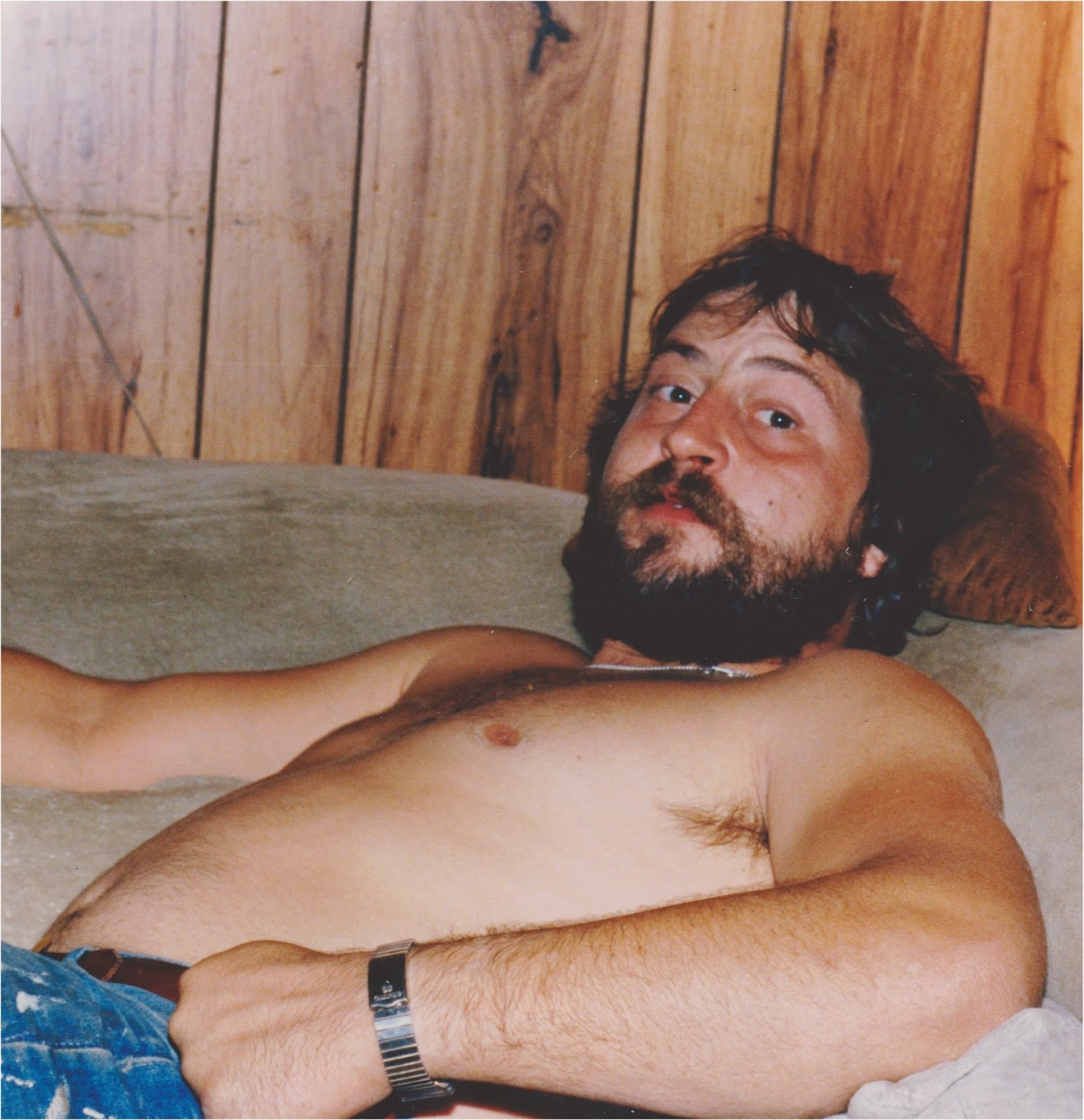 A breaker failed last week and I have not been able to figure out which one. There was no power to the bathroom, closet or bedroom TV, so, no great loss at all.  Jake came by, fiddled with everything and still no power. I will call a pro eventually.

Last night when I was done with work,  I went into the bathroom and, out of habit,  flipped the switch and the light came on. It took me a minute to realize that somehow the electricity had righted itself, as if it was sulking and now happy I needed it again.

I turned on the TV on the same circuit just to check and it worked. "Gladiator" was on - gift from my Goodman on a day when I needed it. I left it on and we dreamed together.
at November 18, 2014 1 comment:

A year gone by 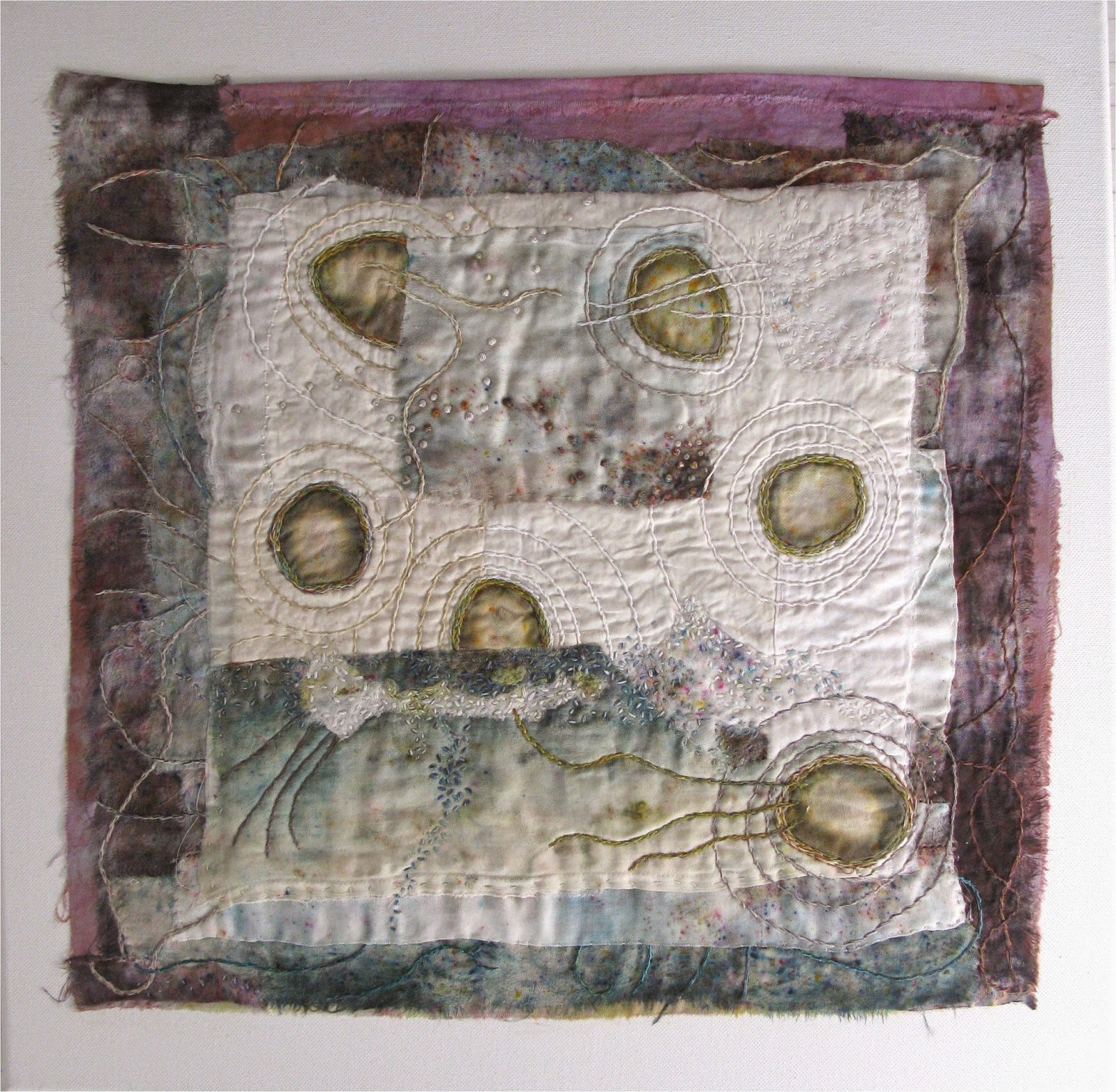 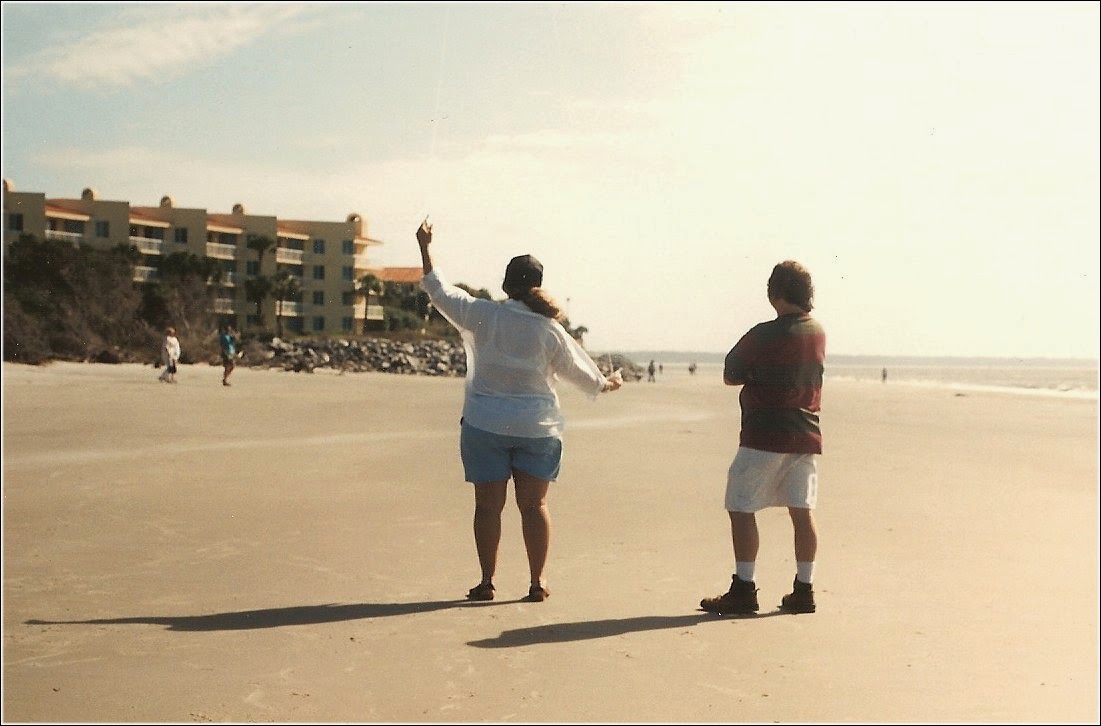 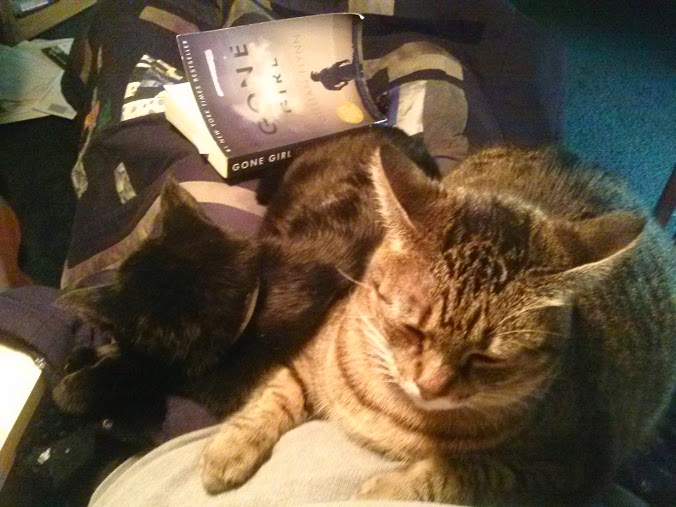 My house may be cold, but this room is warm and we are cozy. The only problem with this scene is that they object when I put the wireless keyboard on their heads.

Tough titty, kitties.  I had a major writing breakthrough this morning. Notes are now down, paths and further questions ironed out. It was a great day, even before the coffee was ready.

Time for Art to Work 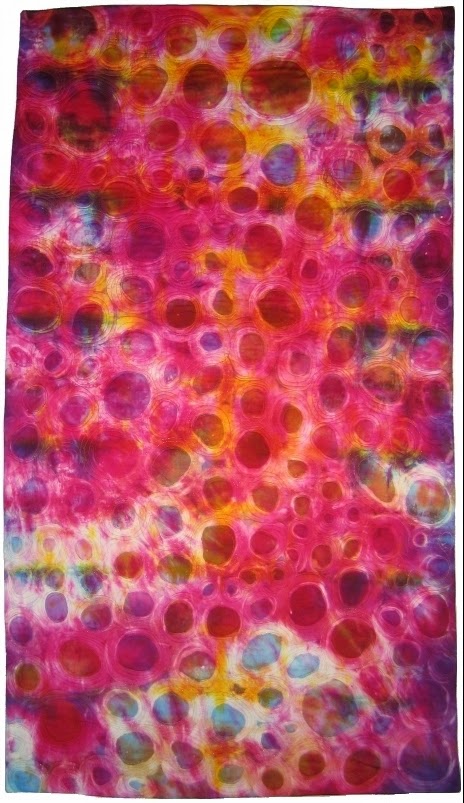 I've decided to take this one and few others  out of the gallery and put them to use.


What better use that a playground or a cuddle for my grandson?

All of my art quilts were built with the same materials and techniques that I use for utility quilts and bedding. Except for the latter ones that used vintage damask, they can all stand up to machine wash and dry. All I have to do is remove the sleeve.

I'm thinking this one needs at least one backup. 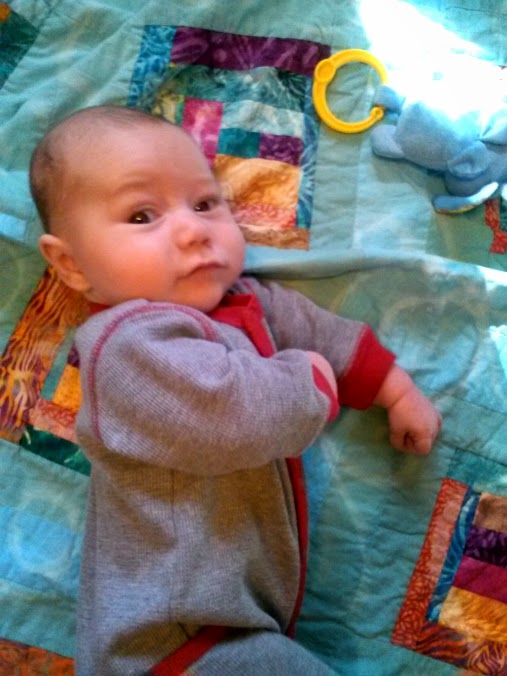 The light of our lives 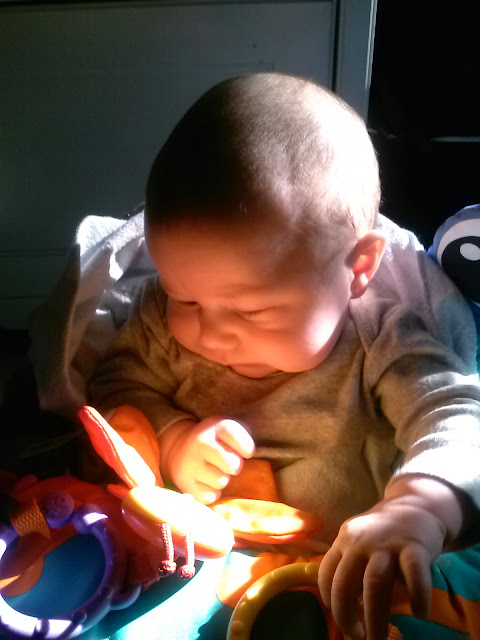 I have always been a picture taking fool when it comes to the babies in my care. Really, I could just watch them for hours. They are so amorphous at this age, changing right before your eyes. Look at those hands!


Unfortunately, Charlie  is already expecting to see his own face when I point my cell phone at him. The "Selfie" mode works wonders when he fusses.

You can see by his expression below, that he is wondering where the damn baby went! 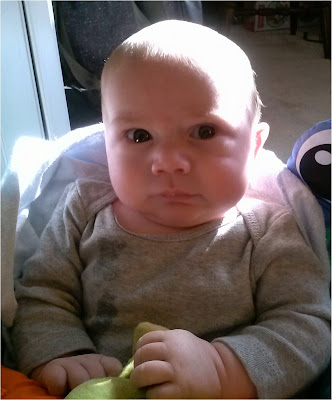 I get pretty much the same expression when I read aloud to him.

We are working our way through "Gone Girl" right now.

These are dark days if I dwell in the past. Charlie helps keep me in the here and now.
at November 11, 2014 8 comments: 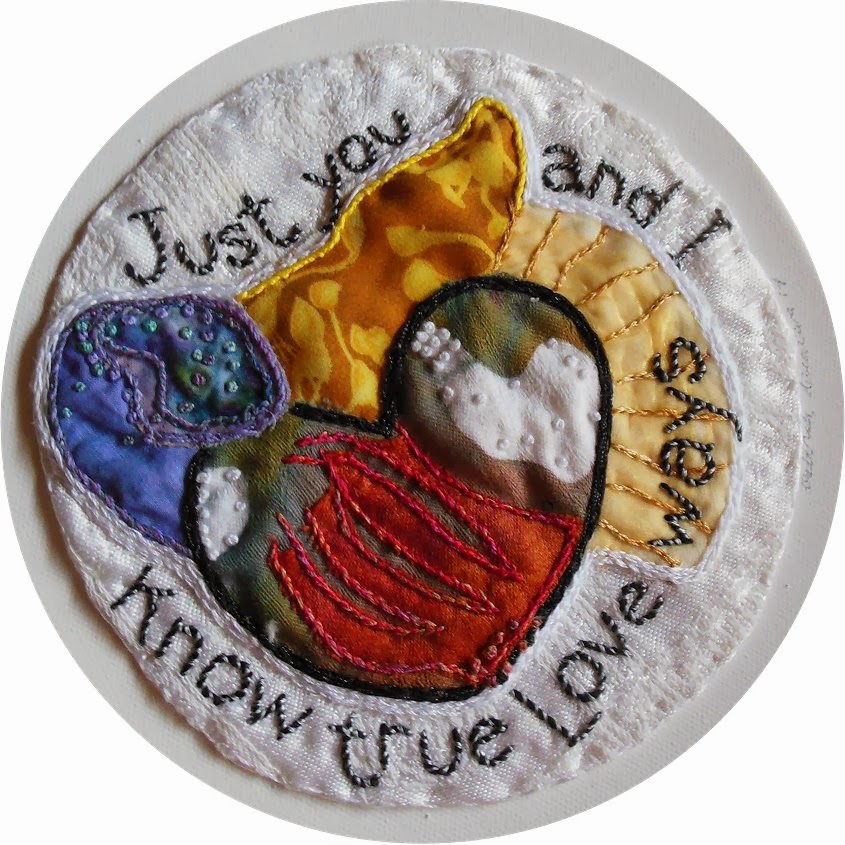 "True Love Ways" should be arriving at its new home tomorrow or the next day.

The proceeds took me for a much needed day away from the ranch. However prosy you might think squatting in IKEAs cafeteria from breakfast though lunch might be, it was just the ticket for me and my friend.

The food is just meh, but the time and space with no one hurrying you away from your table is a luxury. And then there's the store. I'm not much of a shopper, but this place does it for both of us and that in itself is amazing because our tastes are so divergent.

Janice pointed out that I have been squeezing this same pillow every time we got there since the place opened. I finally threw it in the basket.

And for the first time in forever, I was paying attention in the toy department and it's a wonderland.  Charlie likes faces. 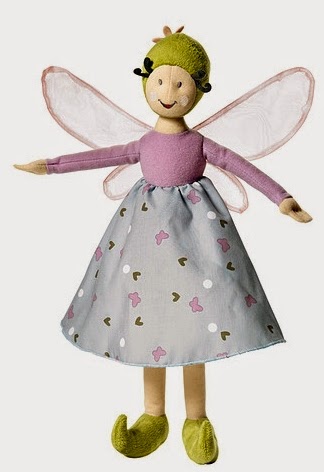 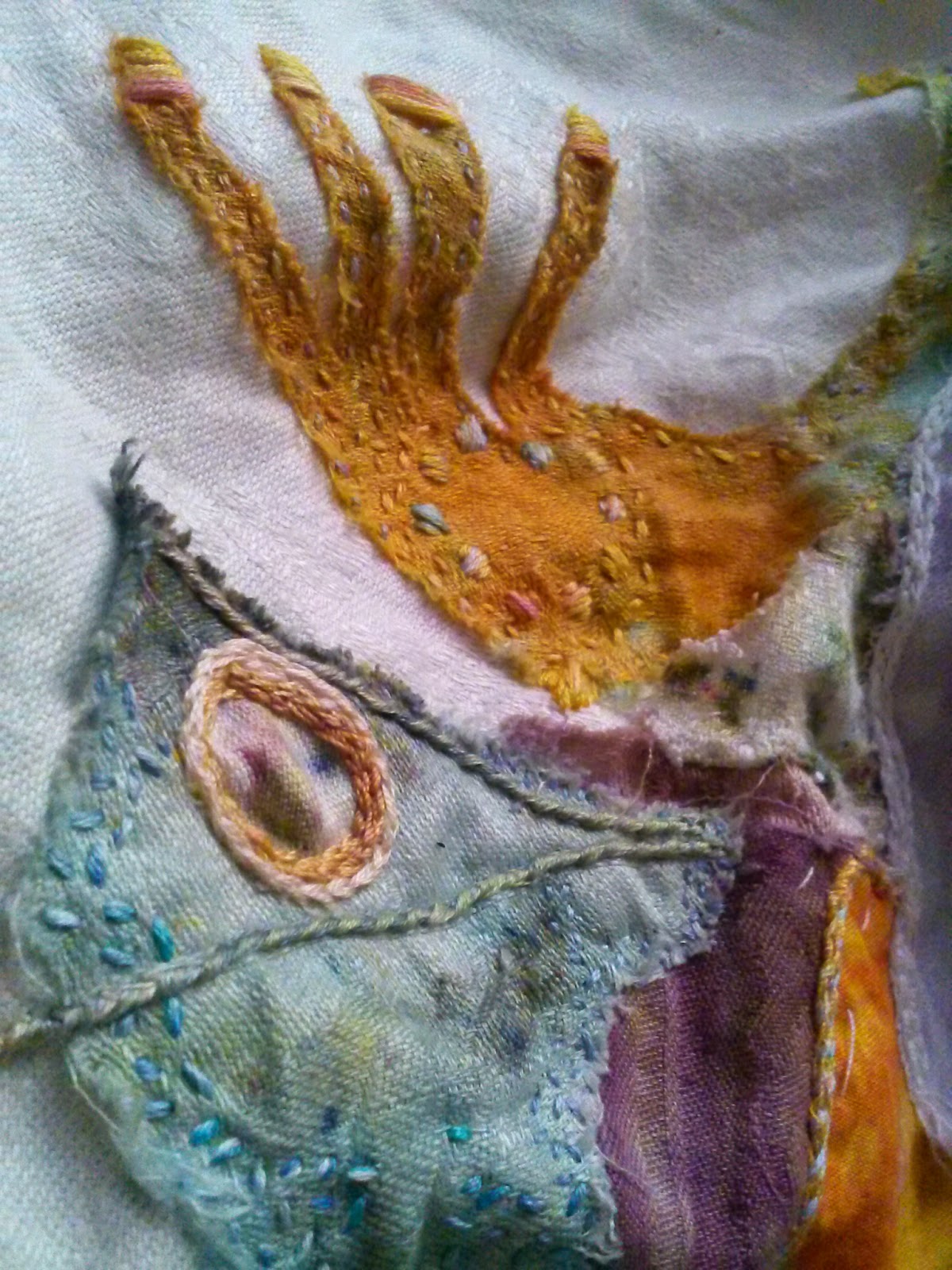 Progress on this piece has been slow but hands free/brain free time is scarce. I take it when I can.


It's been an emotionally and physically exhausting week. The other day I took Jim's wheelchair and left it just inside the vestibule of the Catholic church that's so close we can hear the bell. The door was open, no one was around. I just wheeled it in and left it.


I submitted a short story to a literary journal and have since found out that I have a better chance of getting into Harvard! Hilarious. 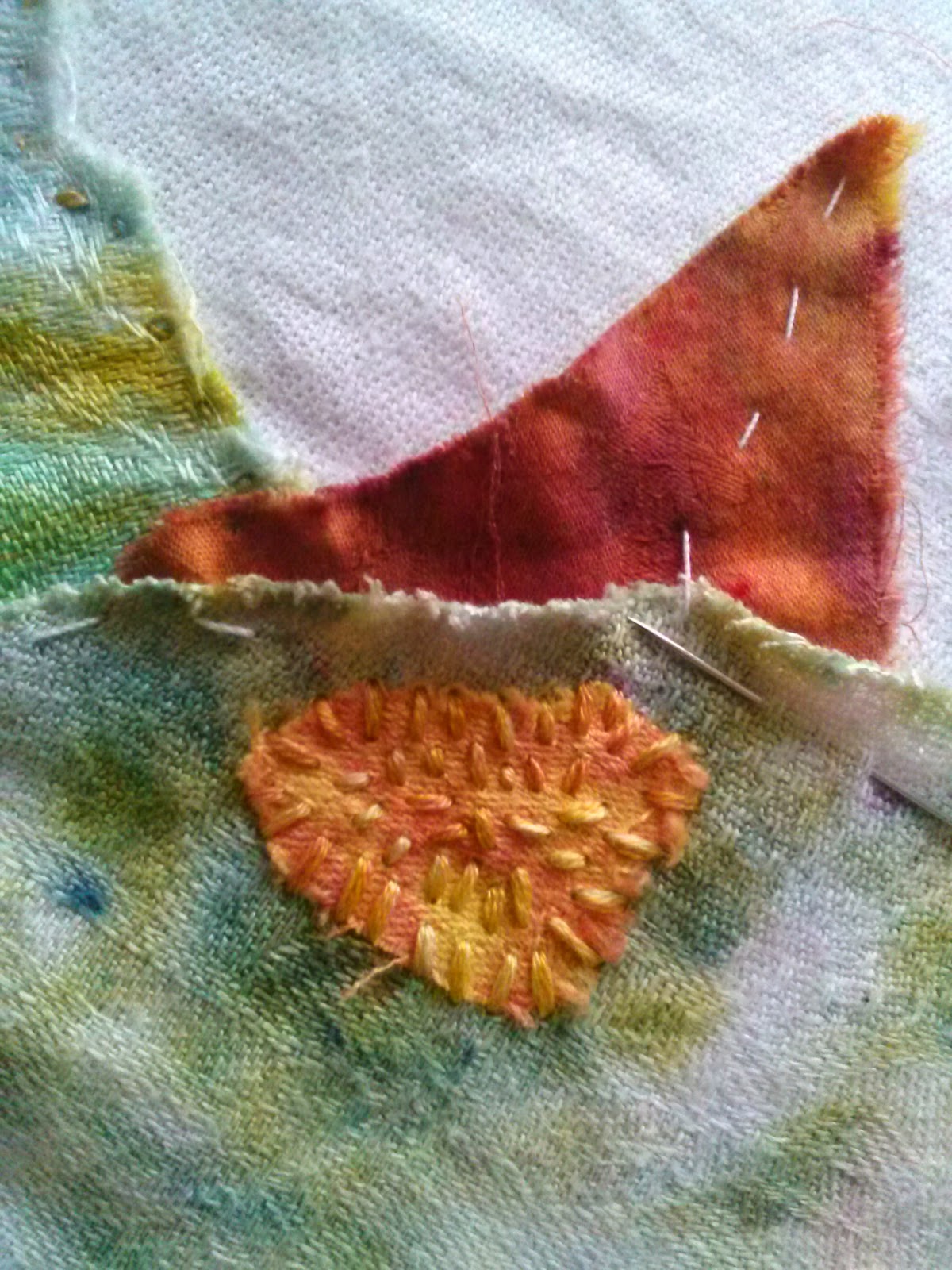 And there's nothing like being greeted in the early morning hours by a smiling face who knows you and challenges you to bring your A game to his day.

This too will be changing. Jake has changed jobs and will soon get home in time to have some Charlie time all to himself. A good thing for both of them. 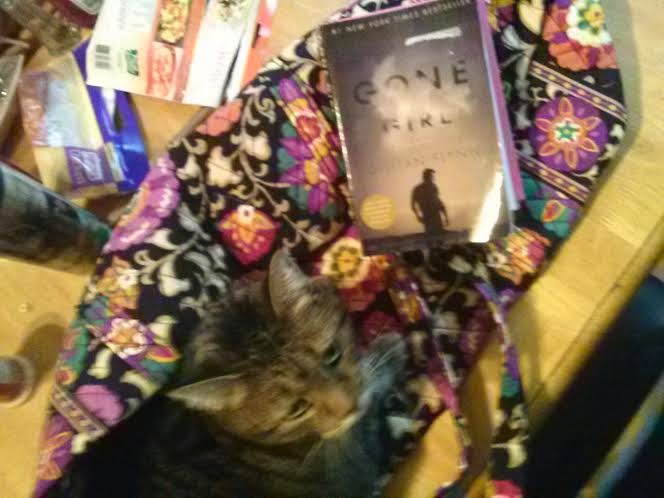 A great package on the doorstep has been the buttercream frosting on a great day (so far).

My sister Kitty has a knack for knowing what manner of outrageous appeals to me. (She's the one who supplied me with the purple stuff for my hair)

I've been craving anything with this VeraBradly design forever - I even stalked a lady in the airport to ask about her bag once! This is the Grand Duffle in "Suzani"  and if I ever run away from home, everything I could possibly need would fit in this only I would not be able to lift and so there will be no running OFT.

And don't send me any spoilers about the book. I might watch the movie if it comes to Netflix, maybe.  I've already heard that Ben's junk appearance is practically a magic trick. If that's the film's strongest draw I feel bad for his wife. I'll get my jollies from between the pages, thanks
at November 01, 2014 No comments: