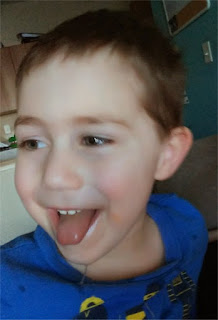 That was the week that was, but it's Charlie Monday still. No going out in this crappy cold and I don't want to be too far from any facilities. He's working hard at this toilet training thing.

He's also completely fed up with having his picture taken.

Nothing fibrous going on other than yesterday I packed some cloth up to travel. None of what I was handling spoke to me much.

The weekend was spent at a micro-retreat for a local writers group. We wrote, we ate, we kvetched. Like that.

I bumped up against the idea that the scene I've been having trouble with has only been giving me trouble because it's done and it's close enough to the end to warrant some fireworks, but they are coming up very soon.