After reading everyone else's deepest thoughts on resolutions, I thought I would take a stab at it myself. Here is the Unvarnished Truth. And for those who need the warning, I have decided that Politically Correct postures will give you hemorrhoids. 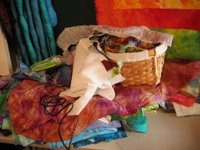 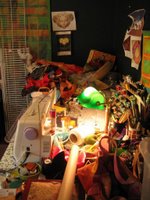 I decided to spend the day honoring Procrastination instead of denying her. My studio looks like Katrina paid a visit so I knew it was going to be a long day. My calls to FEMA have gone unanswered. The backdrop of my efforts today, A "Law & Order" marathon. Tomorrow, the bar exam. 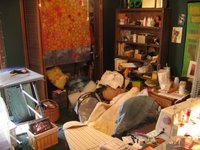 Before I could even get dressed I was finding ways to delay. I have several identical Wrangler denim workshirts, sized 4X, men's 4X. I wish they looked as huge on me as they should. I use them interchangeably as smocks, bathrobes, and my version of the Dixie Mink but I was getting quite sick of the corporate logo hovering over the breast pocket so I decided a little quick machine applique on one of them could cure my wardrobe blues. Now I look like a refuge from the Pyromaniacs Union.At least now I can tell which one to wear in the studio. 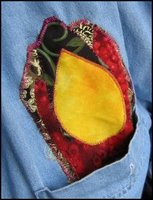 Next on my to-do list, Breakfast. Two microwaved meatballs (in homemade 'sketi sauce) on a whole wheat roll (health food!), half a glass of OJ and two cups of coffee. Then fully dressed and fueled up, I jump on the bathroom scale - none of these "naked post-evacuation" weigh-ins for me. The awful truth lurked between my toes. At the very least I will break a sweat today. I filled several coffin-sized plastic tubs with fabric, vacuumed the nap off the carpet rather than pick up bent pins and decided a break was in order. More creativity! I really needed to finish this crocheted hat that I started last night. Wasn't Dick Clark scary? The Big Peach was out of sync with the big Apple while my neighbors treated me to fireworks and semi-automatic gunfire. Yee-haw Amigos! 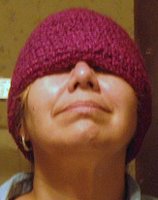 It's dark now. The first new day of 2006 is circling the bowl and I am quite satisfied with the proceeds of the day. No resolutions but some truth, farting around, sweat, a glimmer of order and whiffs of the promise of tomorrow.
at January 01, 2006

Good gracious, you're a brave woman. Happy New Year, and may it be healthy and prosperous -- and creative and successful -- for all of us!

I can't seem to must up something deep and meaningful to say for the close of 05 and the beginning of 06...your entry makes me feel quite at home :)

Oh My GODDESS are you rip roaring funny!!!
Thanks Deb!

and THAT is what I want for the New Year for all of us...some HUMOR!

When I comment on changes I would like to make for the New Year, I am Absolutely Serious. I Do Want to make them...but when I look at my studio, it is also Obvious that many days are spent honoring Procrastination! Your statement: "Before I could even get dressed I was finding ways to delay," describes the majority of my days--distraction is operating even as my intentions to improve are being voiced. (I'm also enamored of 18th-19th century Typographical Emphasis today.) And why is it "enamored of"? Must look that up before I do anything else.

I noticed the dern peach was off time, too. And I was wondering if Dick Clark was going to make it to the New Year. And my neighbors were shooting off gunfire and fireworks 'til New Years Mountain Time. Do you live near me? I am in Marietta.

Oh THANK you for a much needed snort!!!!