To the new blog on writing....

Writing about-  Why  I work with vintage cloth.

I don't know when I'll be able to write for public consumption again. Who wants to read about someone's grief and loss? It's hard enough answering the emails and letters of condolence that have been sent. When will it click off?
-----------------------------------------------------------
Notice 1.2.13 - It's eight o'clock in the morning and I am already awash in fatigue, a rowboat where the one assigned to bail has mysteriously disappeared. Did she fall overboard? Was she gathered to the bosom of the Lord in a one-person Rapture?
The boat is well stocked with shiftless assholes doing nothing and the water is now lapping at the seat planks.

When my sons were in elementary school and first came home with assignments asking them to write a story they were typically stymied so I took advantage of a child's naturally base nature and told them "Being a writer is the only job where you get paid to tell lies"
You should have seen the wide eyes and evil smirks as the wheels in their heads began revving at speed!

From the text of “Aspects of the Novel” by E.M. Forster

“The society to which we belong seems to be dying or is already dead. I don't mean to sound dramatic, but clearly, the dark side is rising. Things could not have been more odd and frightening in the Middle Ages. But the tradition of artists will continue no matter what form the society takes. And this is another reason to write: people need us, to mirror for them and for each other without distortion-not to look around and say, 'Look at yourselves, you idiots!,' but to say, 'This is who we are.”
― Anne Lamott, Bird by Bird: Some Instructions on Writing and Life

“I go back to trying to breathe, slowly and calmly, and I finally notice the one-inch picture frame that I put on my desk to remind me of short assignments. It reminds me that all I have to do is to write down as much as I can see through a one-inch picture frame. This is all I have to bite off for the time being.”
― Anne Lamott, Bird by Bird: Some Instructions on Writing and Life

_________ Market Scene_____________...
Quiet, dark house.
A distant dryer rumbles.
Everyone home and sleeping.
Coiled cats mutter over
missed sunning opportunities, paws over their eyes.
In the market today I stood in a shaft of sunlight
glad it was coming over my shoulder,
the better to read the promises and lies
on the bottles of vitamins. After the Cs, Ds and Es,
I closed my eyes and leaned back into the warmth
resigned to indecision.
Leaning out the window of his glass prison,
the elderly pharmacist said "Bella, Signora, bella".
From some other me,I knew to smile and say "Grazie"
then turn and get on with the day, a winter bouquet added to my list. 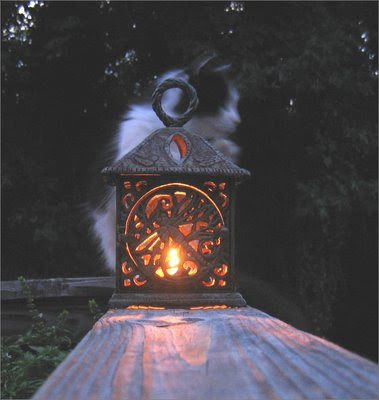 She is at peace.

I know that the infirmity and illness she struggled with affronted her dignity more than anything. I went to ridiculous lengths to see that she was comfortable for a long time. Now that she is gone, I feel unemployed.

I am not haunted although I see her out of the corner of my eye everywhere, especially at dusk. A fallen magnolia blossom, a scrap of paper in the weeds - all call my eyes for a second look and a sigh of sadness.

No one is standing in the driveway waiting impatiently for me when I return home in the car. Under all those silky graphics she was never more than seven pounds, such a little cat, but the empty space she left behind is much larger than I expected it to be.

And here are my darlings, together again. 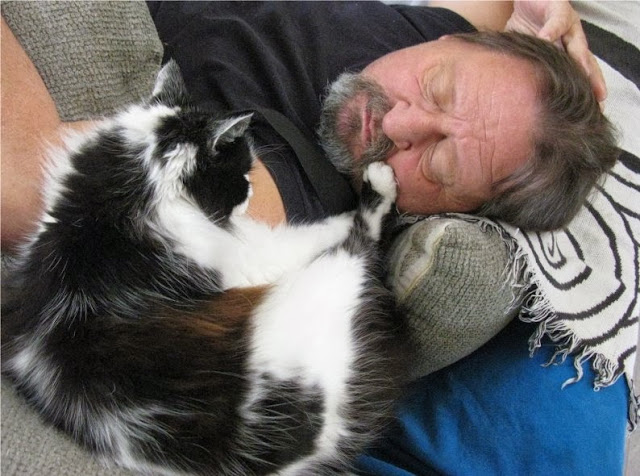 Wonderful, Deb. Very evocative. You capture 'the moment' beautifully in these.

I've come over to your website via Jude Hill (she says Hi). Love your vibrant work, those colours of yours make my heart sing. And then I found this that pulled at my heart and set my memories alight of my own very small black cat Scoot. She was the runt of the litter, she had problems as a kitten, two vets suggested I had her put down and get another. I persevered and she finally passed away in my arms at the age of twenty having been my loyal companion through happy times and some very difficult times. Always there for me... And then there no longer... but after nine years of her passing and another two cats in my life, she is here with me still in my memory, in my heart. I read your piece and I understood.

Thank you for writing, Christine. Your story of Scoot made me think about what makes some of us cat people. One has to be able to appreciate how, in their small, short lives, they master the extremes of existence with no worries about the things that muddle up so much of our human lives.

They flux effortlessly between a delicious languor; the majestic stillness of watchful repose and bursts of savagery and the pure joy in their physical selves and the world they live in.

Some days I wish I was my own cat.