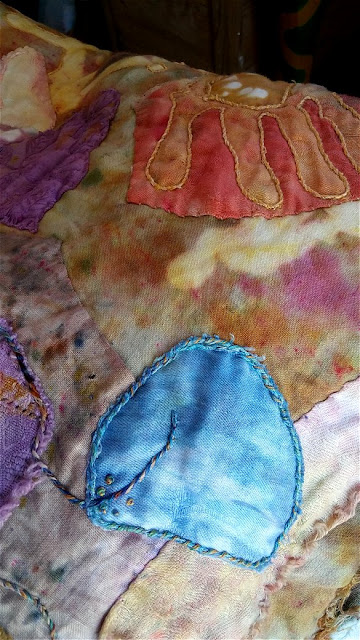 All that picking and sorting. I auditioned dozens of pieces of cloth, but nothing grabbed me.

I hadn't quite finished putting everything in the basket when I got a call that Charlie needed to be picked up from school. He was having a Bad Day. I abandoned the basket of wishful thinking. Probably a good thing.

Nana to the rescue and glad to do it. The weather emergency fizzled and I was home by dinner time.


The next morning I set the basket aside and rummaged in the closet where the UFOs lurk. Came up with this as-yet-unnamed piece. Not having named it makes it hard for me to search for it in the archives. Probably from 2012 or early '13.

I'll try to get a decent overall shot of it tomorrow. It reminds me of cave paintings. 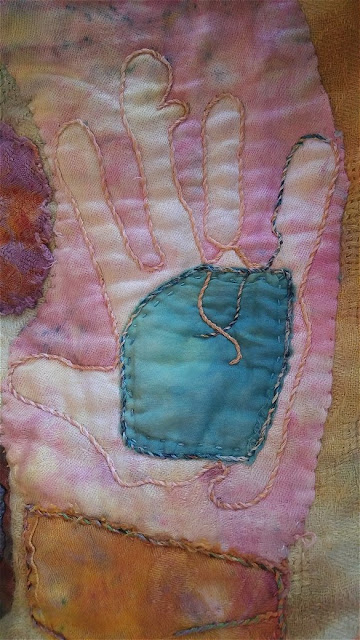 It's kind of a big, sprawly, unfocused panorama. I'm counting on these lines to make some sense of it in the long run. 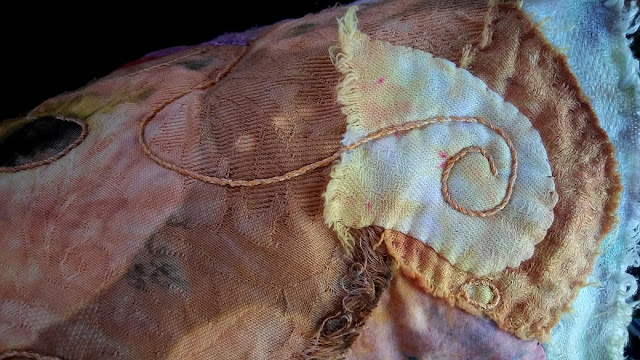 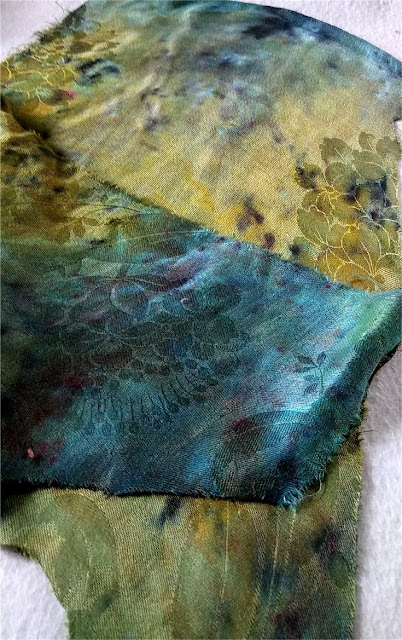 They say we may get some winterish weather on Tuesday. Chances are, school will be canceled which means I'll be spending a day or two with Charlie so I'm prepping the river basket.

I have something in mind so I pulled a bunch of cloth this morning and actually ironed it just to see what I really had. My grandma would have had a fit - I ironed sitting down!

I don't know how to capture the iridescence of damask that's been ironed. This picture almost gets it.

Now, for the patience to take my time composing - not threading a needle until the design works.

Lately, the rush to stitch has only lead to misery.


Right now stitch needs to take me to the place where the words grow. 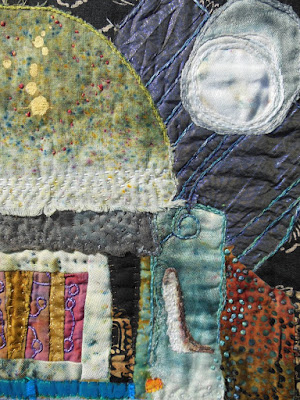 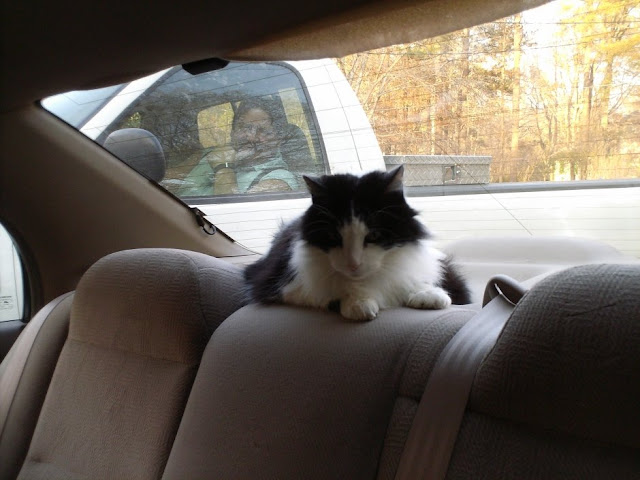 Found while looking for something else. I can't remember taking it or seeing this picture. Warms me. Jimmy & Karma were an item. 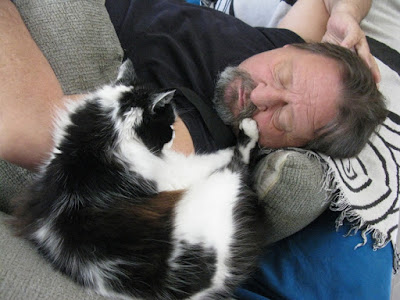 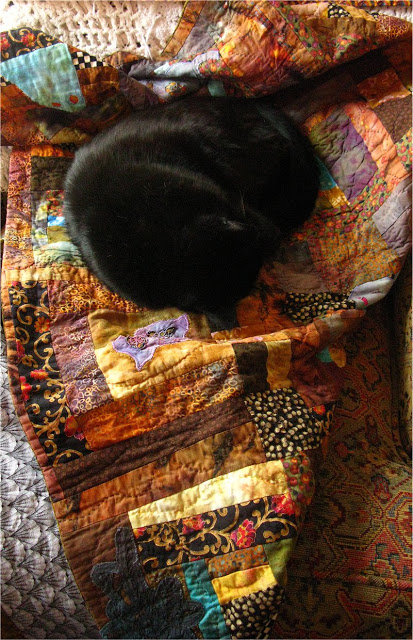 It got so dreary today, temps in the mid-thirties before sunrise and not much more after, then it started to rain. All my bones are suddenly on the warpath. There was nothing for it but tea, drugs, and mending. 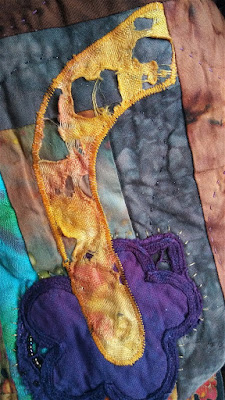 The damasks I used in this quilt were old when I found and dyed them. It's interesting how this some of this cloth seems to evaporate with time and use. Sometimes, the look works - shabby chic - some call it.


Not in the case of this quilt. It has some personal provenance and  I'd like it to stay around awhile, not be perceived as something tattered or disposable.

When I'm satisfied it's whole and strong enough, it will be a gift signed "Nana". 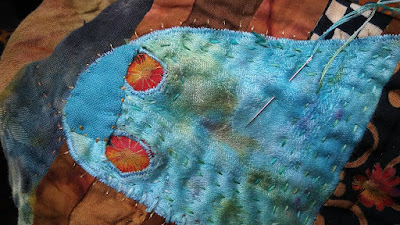 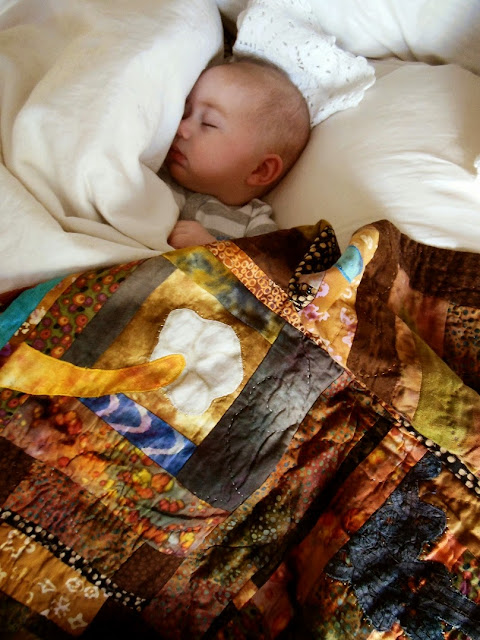 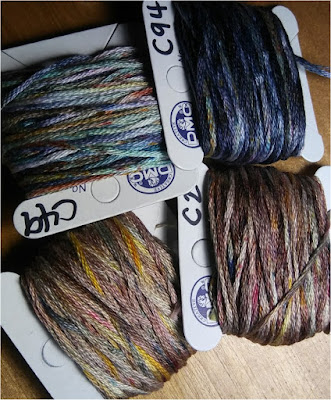 Every time I fill an order for someone I'm struck by how well they get along. Perhaps chosen for a project or just a matter of taste, they almost always hang together well. 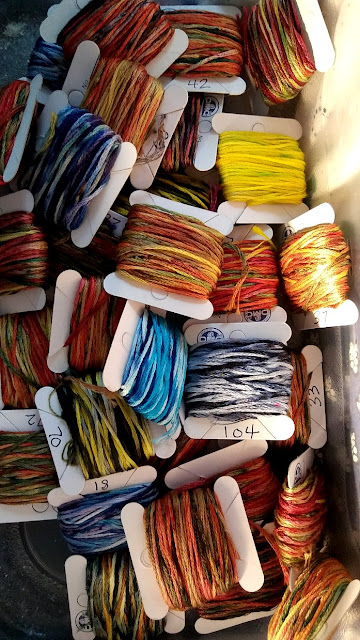 Thanks to everyone who pounced on some Dirty Threads to brighten their winter days.

If you missed the post, I've done away with the Random Acts of Dyeness blog, but still offer scraps and threads right here

(I will add the date to the page each time I process an order so you are seeing the latest available. Just remember to hit "refresh")

I wish I could come up with a better way of managing inventory and the web page. What I do now is so inefficient, but there it is. As singular as the product itself.

See the link right up there on the pages bar?  I still got stuff to peddle.

The"random acts" thing has been bugging me for a while. A long time ago, before the expression became meme fodder, it was a spur of the moment decision, title wise. That was the only random part of it. So, the blog is gone. The fun remains. One less web thing that I have to fiddle with.

I'm still going to dye thread and cloth for a while. Looking forward to being outside in warm weather by the pool.
at January 09, 2019 2 comments: Links to this post

No pictures. It got ugly up in here for awhile. Still ain't pretty.

I'm ok now, but jeez Louise, technology will throw you under the bus the first chance it gets as if it were a living breathing enemy and not a mere tool.

I was minding my business, chipping away at the mountain that is Prophets Tango (my book in progress) congratulating myself that I had only EIGHTEEN scenes to run a fine comb through. Something I laughingly called, the Last Pass before I let others have at it.

Colin was scheduled to shut down the power to the whole house to replace an outlet in the kitchen. We were both nervous, but I was underfoot and so left him to it. Deciding to take a break, I closed the laptop. It powered off instead of going to sleep.

When I went back to it I realized that sometime in the not so distant past week to ten days, I decided that *spacebar*

All of this to say, I threw in the towel of home-baked remedies and hacking and took it the repair place. After two days, neither problem could be cured and they handed me the contents of my hard drive copied onto a nice external drive and the original drive removed from the dead machine, now living in its own nice little box like a hermit crab.  140$ thank you.

So I sighed, brought drives home and thought I'd be back in business on my old faithful Acer here, just plucking the needed info from the backup. Think again.

After an hour of keyboard gyrations, I was no closer to getting back to work than I was when the lights went out. Scrivener, the app I use with all its wonderful complexity, had failed me on top of everything else.

I still had a recent copy of the MS and an online place where recent edits still lived so, nothing was really lost except, cash, momentum, and of course, the travel laptop, which had been a gift from my sister.

Since August, for reasons seasonal and hormonal - I have lost about half of my hair. I should shut up about that because I still have more than most people ever will, but it's been depressing. My car interior looks like I own a collie. Now I'm afraid to look close in the mirror because I'm pretty sure the roots are going to be white.

Worse things have happened to writers.

All of this feels frivolous in the face of what hardworking Americans are facing with the ongoing temper tantrum of the Shitweasel squatting in the Oval Office. 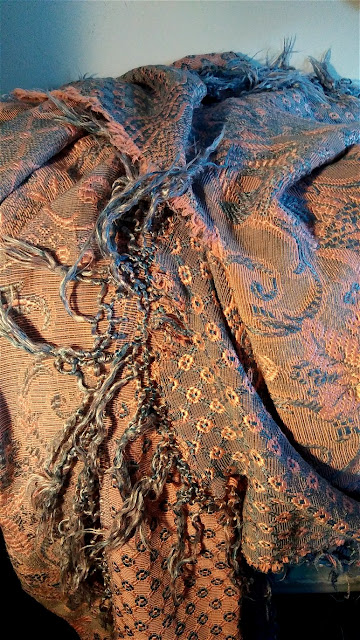 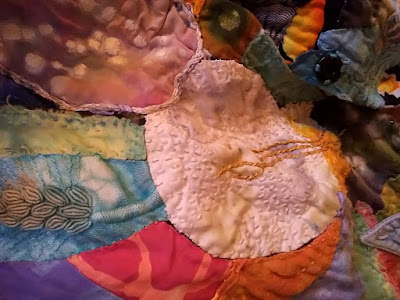 I put on the magic invisibility cloak this morning.

Several of the vintage damasks patches are evaporating. No other way to describe it.

I don't know if I'll be correcting this shabby chic-ness. I never wear it out of the house. It draws too much attention and I have no explanation for the time this took. Like maybe I was in prison, or the nuthouse or something??
at January 04, 2019 3 comments: Links to this post

One of the things I like best about Facebook is the way it dishes up random memories.  Colin was playing crack, er, technology dealer on... 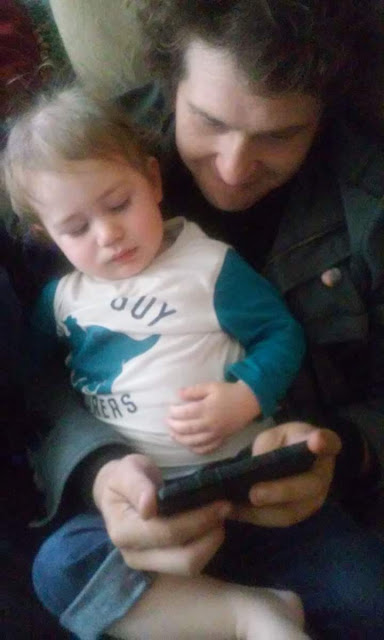