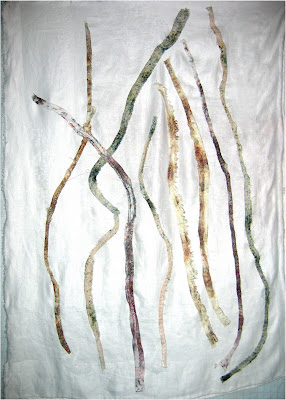 EB had a really thought provoking post yesterday. It actually put my withered brain in gear for a few hours and on into sleep thinking about the answers to the questions she posed. Which art & artists inspired and, more importantly, why. At first I opened an old sketch book and scratched around with pencil in the dark. There were some old drawings in there by someone I barely recognized. Some were good. Some were awful. The questions raised were around what we like and how to stay on the task of bringing those elements into our own work. What is it about a particular piece (mine or anyone's) that captures my attention and keeps bringing me back? The list got long and strange. -energy -stealth -symbolism -gestures -"living" color - that which is not seen but hinted at. - moods suggested rather than stated - a "booga booga" quotient. Not wanting to waste any more ideas (I find that if I commit something to paper it never finds it's way off the page) I dragged some lines around with fiber and thread. I love the way you can force your will on strips of old damask. It's old and full of unknown history and will slither away on it's own if you don't rein it in tight.
at August 26, 2008

OOOOO That last sentence really got to me------and the slithering on the piece is fabulous--love the raggedgy edges and muted colours---can't wait to see where they slide off to.