Who knew that 8's were so fortuitous? Certainly not me when I painted "Congregants" in 2007. I'll take good luck anyplace I can trip over it. I was glued to the screen last night to the spectacle of the opening ceremonies of the 2008 Olympics. Chinese culture is so complex and old, it would take lifetimes of study for a deep understanding and I confess ignorance. I resigned myself to just taking in the visual aspect and kept hearing myself oo-ing and ah-ing over each new image. The general impression I got was of a people who will work together to accomplish a goal, no matter what that goal is. The results were amazing. I won't go all political on you here but I could not help but reflect on how opposite this culture is from ours and how our culture suffers from divisiveness, feelings of entitlement and the unwillingness to accept personal responsibility in the face of all the challenges we face as a nation. 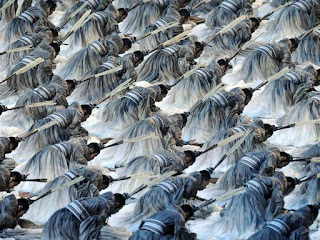 I had intended to stitch my way through the evening but didn't get much accomplished beyond sticking myself to bleeding a few times. When the actual torch lighting began I was charmed by the water spirals projected on the screen along Li Ning's progress around the inside of Bird's Nest stadium. My freestyle hand quilting is almost always spirals building out on one another much like these. 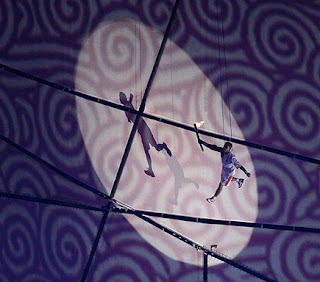 No matter what you think about China's politics its hard not to be moved by the sight of so many people working together to produce such a spectacle.

I was thoroughly awestruck by the opening ceremonies. I would love to have a DVD of it ! I heartily agree with your thoughts as well.

it was amazing wasn't it?