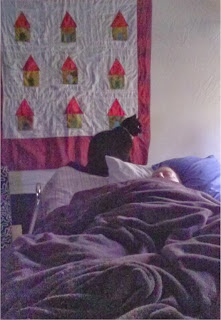 After Jimmy came home from the hospital last week Voodoo was on constant vigil with him, mostly sleeping between his feet but once or twice a day stalking around the perimeter of the bed.

Not normally a lap cat, he has become one in The past months, needy and vocal in his demands for attention. I was thinking that it was just part of his dotage but he has taken on this guard duty with a fierce gravity that forces one to admit that animals have a knowing beyond human capabilities.

When the priest came to give Jim last rites Voodoo sat at attention at the foot of the bed and his golden gaze moved from Jim to the priest and back again, over and over during the recitation. No wonder, no amazement just a steady watchfulness over his charge and the proceedings.


Bereft, he has transferred his need for contact to either myself or Colin, whomever has a warm lap in his moment of need. 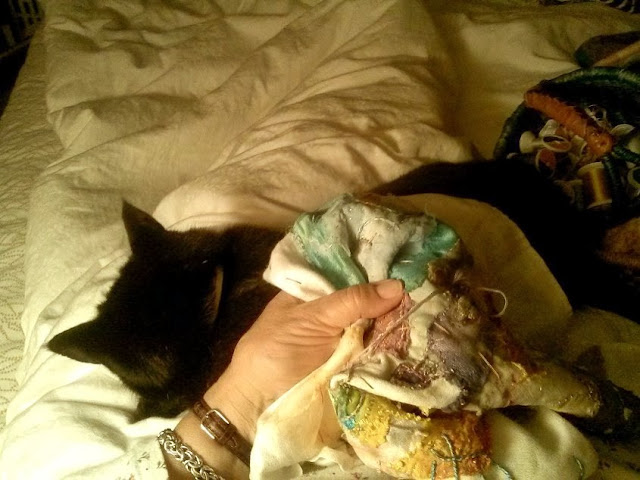 Voodoo connects all of you ...

Stitch on my dear Deb, all your emotions into this cloth, grief, stillness and the memories of golden moments of love with your Man.

I am not surprised. When my brother Jim was bed-ridden during his last few months of life, their dog Missy was his constant companion and nursemaid, sleeping on the pillow above his head. Now Voodoo is just as much in grief as you and your boys. Our furry family know loss and heart-break too. It's good that there are laps for him to seek comfort in...

I hope Voodoo gave you some comfort too. xoxo

a true cat spirit. good to see you sewing.


Our vet says the dog can hear the heartbeat of every human in the house. I wonder if cats can also.

Of course.
How beautiful.

In the last night of my aunt's life, the feral cats she fed, who had never been in her house, came in and sat on her bed.
Love to you and your family.

My heart breaks for you. I believe our pets do know things that we humans don't.

My dog kept a vigil under my mother's bed and would escort the hospice workers, priest and other visitors in and out. They know. What a beautiful picture of all three of your men. I wish you peace.

That's a touching story. There are so many mysteries. So many things that we can't really explain. Thanks for writing about Voodoo, and Jimmy, and you.

Stitch it all in and out, weave your love and loss and memories.

Watchful friend, standing guard as his person slept. That photo is heartbreakingly sweet.

Well said Terry and yes, they very often know when the end is coming.
How lovely that he chose to stay as bedside company and now allows you his warmth in your grief.


I am glad you sense Voodoo's feelings as valid as your own.

I can see how brave you are being and how beautiful the stitching will be too.