...which means somebody needs something that costs money!

In case you were wondering just what a Fat Baggy was, this picture should help clarify and what a deal they are.  First, there is tea and an episode or two of "Downton Abbey" reruns or something like it - engaging but not demanding. "Predator" and "Aliens" work just as well.

I sit with one or two large tubs of random, hand dyed cloth and select small pieces making sure I don't repeat myself. Then I roll them up like tiny Cuban cigars and cram them into these little bubble mailers until I can just barely fold the flap over and pull the glue strip. And people buy them!

I've learned it's smart to write the address on the envelope before I stuff it. Writing on the stuffed ones is like writing on an angry hippo. On average they weigh out at the post office to be 1.5 pounds, give or take an ounce.

I'm working from these two tubs right now. There are at least six more. My stock is well churned and shuffled through. Some of these pieces go back to dye sessions from several years ago.  If you've bought one in the past six months, I'm willing to bet that you've already used up much of it.  Time to restock!! 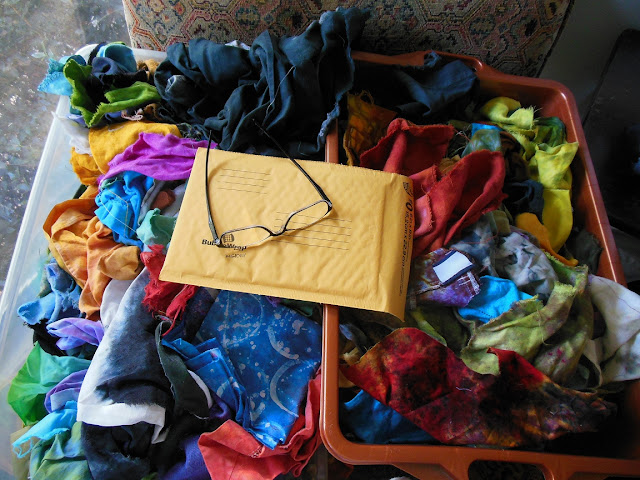