For about a month, we’ve been trying to find a home for a fiberglass truck cap that’s been hanging around outside since, oh, 2001, leaning up against the house, lending that Tobacco Road charm to the place. The truck it came with died and the hope was to transfer it to a replacement vehicle. We paid nearly 300$ to replace the large rear window on the cap, not a week before fatal transmission failure made that expense moot. I’ve had it on various websites under FREE and CURB ALERT. So far, no takers and the weeds are getting tall around it. Good thing we have no HOA here. 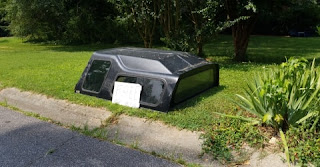 I’ve told a couple of people that Jim’s been close these days. Yesterday proved it for me.

I lolled about in a housedress until nearly noon, doing as I pleased. Something, someone said, “Get your shit together and go get the things you forgot at the store yesterday. Like deodorant, laundry detergent and a hairbrush. The basics of civilization will escape me from time to time.

I dressed with whatever was lying around that was not befrigged with cat cooties, pulled on the non-favorite sandals instead of hunting down the beloveds. Rather than wait for the AC, I opened the roof and windows wide and headed out. Timing was everthing.

I had to wait for a few cars to go by before I could pull out of the community. When I did, I fell in behind a small pickup, black, older. As I got closer I could read that it was a GMC Sonoma, same model, and color as Jim’s. They are very plain so there was no telling the year.

We sat and waited at the train crossing for a freight train to rattle through. Twenty-some cars instead of the usual eighty or ninety and I debated jumping out of my car and running up to speak to the driver. “Hey, mister, does this old truck need a matching cap?’ The gate came up and traffic moved out. I resolved that if he made a right in the direction of the grocery store, I’d follow and engage.

Just before the intersection, he made a hard, unsignalled right into a different shopping center and parked. I followed. I was committed. Or should be.

He wasn’t an armed madman. A younger Dave Grohl type – dark, hairy and grubby, but I’m sure I gave him pause when I blocked him in, rolled down my window and asked what year his truck was. 1998, just like ours. What were the odds? I felt like Jimmy was in the passenger seat laughing and had to laugh myself.

So I told the kid about the cap, offered it up for free and gave him the address where he could look it over and help himself, or not. He was non-committal, probably relieved I wasn’t the Law.

It's 5:00pm Sunday. Sad to say, it's still up there.
Guess he decided he didn't need to accessorize.

PS...Craigslist is dead. Long live Facebook Marketplace. The same day as I decided the cap would be headed for the dump, I listed it on FB marketplace. In an hour I had six people interested. Inside another, two nice men with a small truck came, fitted it to said truck and spirited it away to a life of continued service. I'm so happy. They even scrawled a thankyou on the FREE sign. 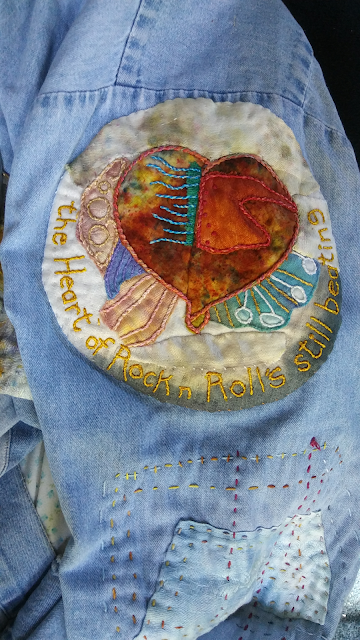