The rubber flap on the cat door is old and leaks cold air. For years there was a piece of an old quilted experiment stapled over the outside. It was crusty and ragged so I pulled it down and tossed it out back in the spring. A replacement was necessary.
On a high shelf in the closet I found a large unfinshed quilt. Large. Lots of cloth wasted.  I cut a two-foot square from the least obnoxious corner, hemmed the raw edge on the machine and called it done.
Then I spent the rest of the morning taking what was left apart. Keeping the best of it.
This floating under more than over the others, cloth so soft, it feels like skin. 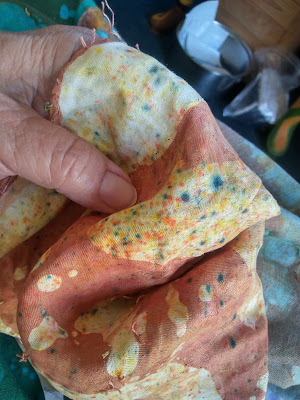 This a piece of the softest damask. It was part of a small tablecloth. To be whisked out of the Maitre'd's jacket pocket to freshen a cocktail table with a flick of his wrist. The yellow freckly places stayed under soywax during a ill-advised overdye.

There were also places where I used softscrub to discharge some of the color. Much of this after the design was stitched down to the backing. The very bad design could not offset the colors that I must have been besotted with. It was ugly and I had no qualms about chopping it up. 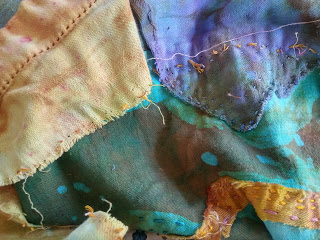 Three types of cloth so incongruent. The base, a griege cloth. Some mongrel cotton/poly blend by the way it refused the dye. The teal? An IKEA dishtowel. 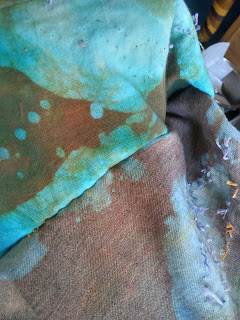 This is the trial run of  Bathtub Gin Dirty Threads. Another learning experience underway. Turns out that this herb drying rack did not go... 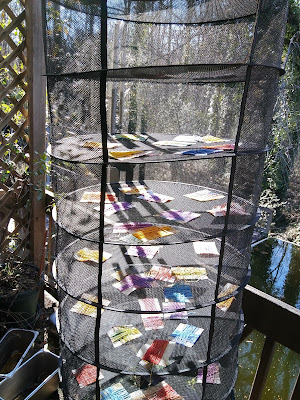