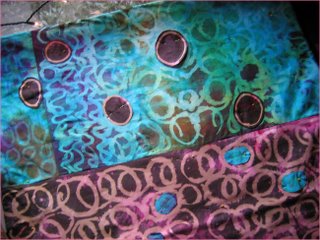 After reading that last post I had to remind myself that, in the midst of all this personal turmoil, I have been getting some Art done almost daily. This one is plaguing me. I took my first shot at using Melody's Escape Hatch Finish and of course, screwed it up. Don't ask. Now I am spending hours re-arranging the spots and have a sneaking suspicion the dark ones are not going to make the cut at all in favor of some other color. I should know by now that this series does Not shine until way, way into the design process and a lot depends on the machine quilting. It's still in the sow's ear stage. Just had to mention that last night "West Wing" and "the Sopranos" were equally breathtaking entertainment. Figure out what that says about yours truly.
at March 13, 2006

Don't worry. I had a "Melody's Hatch Gone Haywire" incident before too, LOL.

I hate the escape hatch method. I always mees up. Though I will get better at it, I like the look of it.
I also like the dark dots... alot.

I've had problems with the escape hatch, too. My slot in the back seems to grow and sag and not be flat and pretty. Think I like facings better. I like your dark spots.

Yes, WW was nice this week... but please let something more happen with Donna and Josh before this ends!!