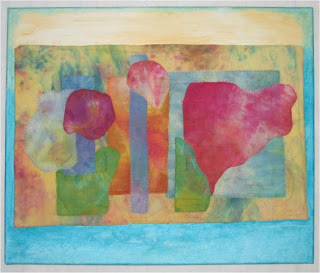 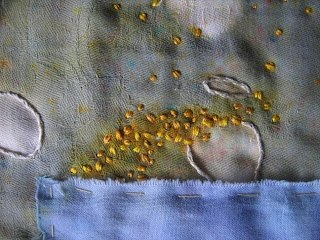 I've finally taken the step of working beyond the mounted fabric. All that white space around the piece just won't do sometimes - especially when the standard sized canvas is not really right for the piece.  OMG, it's almost a painting.

Doing this made me very anxious - that old "artist faces blank canvas fever" came back like malaria. Then I reminded myself of the gallon of gesso I have languishing under the work table. There are do-overs aplenty in that can.


I did a little stitching on the current WIP last night but I was afraid to go too much further as I was still feeling pretty pointy headed and didn't want any blood on the design.

Yesterday (my day off) was lost to me. Tuesday night around midnight I took a new pill that's supposed to help my back pain and NOT render me deaf. Instead, I was a drooling idiot for most of my waking hours yesterday.

Jim and Colin had great fun mocking my stoned self and I will have have to revisit that tutorial, written heavily under the influence as it was. I know spell checker had a merry time of it. Wordy as hell for  a tutorial. Still, I had been thinking about what I wanted to say for some time so the thoughts were there just needing to be rounded up like so many rabid rabbits by the rancher with cotton candy for brains.
at March 11, 2010

Anonymous said...
This comment has been removed by a blog administrator.
6:32 AM

Lovely expression..pointy headed...
I am frozen with fear about starting a piece at the moment. My blank canvas will remain so.

Both of these pieces look interesting. I partciularly like what's going on in the bottom one. I wanna see more of that.
With regard to your "pill" - too bad you didn't go to see Alice in Wonderland in 3D - now THAT would have been a trip and a half!!!

OOOOOO! I love this new treatment of the canvas. You've hit perfact with your colors and the use of tehm. I LOVE IT! and it doesn't steal from the cloth part either. Beautiful. You should be really pleased with yourself. I love those "bleeding" yellow stitches too. :) :) :)

what back pills were you taking that made you deaf?