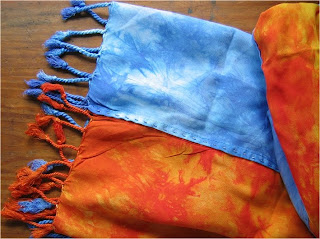 In addition to leaving the current WIP at the office Friday night, when I tossed my stuff in the car I tore my right thumbnail to the quick and all day Saturday I kept banging it into things making it worse.

Last night it was all I could do to manager seven feet of a simple running stitch joining these two rayons scarves lengthwise. Why didn't I run it up on the machine in 15 seconds instead of taking most of "Lawrence of Arabia" to get this much done? It will be finished when I can cross each of those blue stitches in orange. Maybe later  this evening. 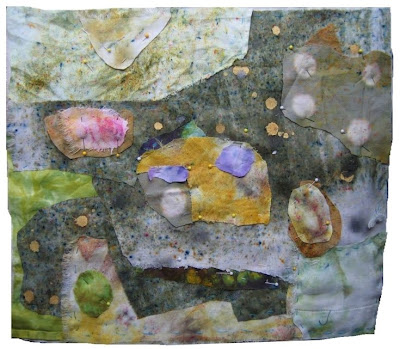 There were a handful of bottles of dye stock that have been out on the deck since the fall, mostly blues, so I overdyed a cotton sweater that's been too horrible to wear in public (a combination of reds, browns and greens resembling road kill)      to see if the dyes still had some kick. Poor sweater spent today hanging over the deck rail getting rinsed in the rain all day long.
at March 21, 2010

well the rain is headed here for tomorrow...