Coming up for air after the worst head cold in memory. For forty-eight hours I was too sick to complain. Grateful to be upright and quasi-functional. I was so grateful for two full and productive days poolside last week  that it didn't matter that I was sneezing and sniffling until I sat down at the computer for the day job and realized that I couldn't talk or make sense of what I was seeing on the screen. Over-medicated much? None of it was making a dent in any of my symptoms and I discovered that more was not better. To bed.

It's past and over. So what used to take 24 hours now takes 48, a concession to age that I'm now willing to acknowledge.

This basket of delights is a fat baggie (picked with gloves and a mask!) that will be flying home tomorrow. 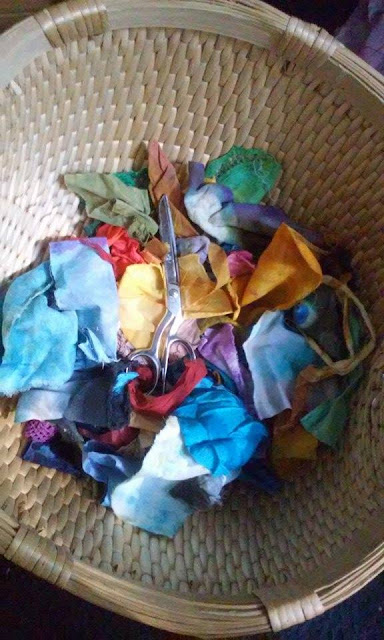 fat baggies are a kind of angel

Sleep, lemonade, honey and being 'off the hook' are the best home cures. If you relapse, consider taking it seriously and checking your bacteria and viral parts with a trusted MD. Once or twice I mistook contact pneumonia for a cold and that was actually quite dangerous.

I hate colds! Had one for 10 days, but got through it.. finally drug my Neti pot out of moth-balls to get rid of the last of the crud in my nasal passages, then it was gone. Hope today finds you feeling much better!