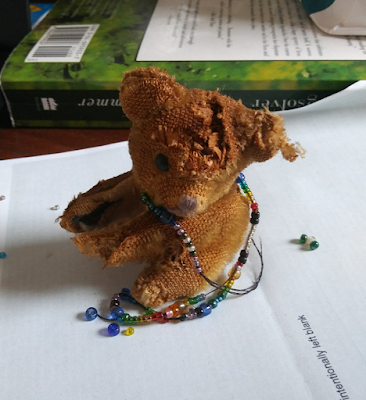 Many things try. This little bear had already been around awhile when I put it on the stem of the rearview mirror of the year-old Civic I bought in 2002. Its owner was in the Navy Reserve and was unexpectedly called to active duty and needed to sell it quickly, made me great deal.

The beads were a gift from a boy I liked in 1969 when I spent time on Cape Cod. Who strings beads on thread? Boys in love, I guess.

Little Bear saw every one of the 300k+ miles put on that car between myself and my son. It still runs, just passed inspection, but I doubt it will serve as transportation again. The next owner is most likely to part it out. It served us well.


These came in the mail yesterday. I have no way to know how old they are. Twenty? Fifty years. Come dye season, they'll be born again, this time in service to art. 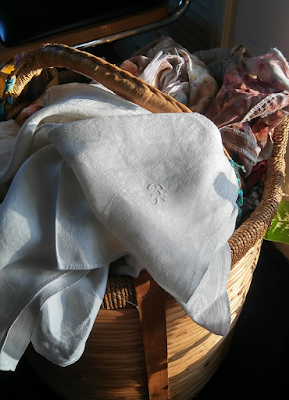 Thanks, Mo.
The last fourth of it is in the hands of my editor. From there, I descend into marketing hell.

This is a MOMENT!
I feeeel it

Congratulations on finishing and yes I know it's just the start of a new phase. I'm moved to mourn that teddy and have similar issues with stuff that no longer serves.

Michelle, I'm going to take him up to the pet cemetery for proper burial.