It takes a long song to do a drama justice. And three books to tell the story I wanted to write because I was told that you just can't print an 800-page book and not lose money. 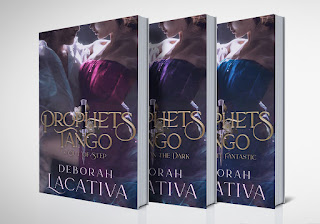 It's entirely coincidental that Prophets Tango is finally up on Amazon on Independence Day. I won't even muse about that.
It won't kick live until July 30, but you can preorder ebooks here. Print editions as soon as I can figure that out.
The KDP interface is unkind to rookies. It took me days to get things right and I have until the 25th to tinker, but for the moment, I'd like to just step away and listen to some music. Be quiet inside, manage expectations, and fortify against reading reviews. I'd like to swear that the only reviews I'll read will have to be telegrams or snail mail. As if.
I'm frittering, the archaic usage, sort of. An emotional state where you vibrate between feelings so fast that you can't react. Relief, exhilaration, exhaustion, anxiety, and the spiraling twin moths of tristesse and saudade. It figures I'd have to go to languages other than English for those last two.
I gave in to them, had a good cry, and got on with it. Life.
Charlie and his other Gramma were here for a swim. I'll join them later for burgers and fireworks.
at July 04, 2021

Congratulations (((Deb))) you did it!

what an accomplishment ... can't wait to read them!

i await the print edition

You Go Girl !!!!!!!
Ah, Leon in print someday soon. Swilling vodka in the library.
And the Bridge with our little Anna. My two favorite parts.
Brava!!!!!!

Yay!!!! Congratulations!! I can only try to imagine how you must feel, but I think I can get a sense from the range of emotions you describe. Well done Deb.