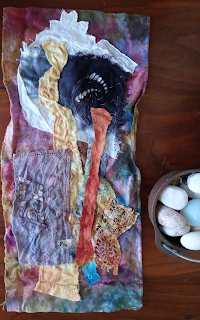 I took a break from the domestic push the other night. On Dee's recommendation, I watched "Being the Ricardos" on Netflix. Originally, I was dread-set against watching it.
"I Love Lucy" was on the air from the time I was two until I was in third grade and I hated it. The smarmy fakery and the evil snarkery of all parties. Always trying to one-up one another in the meanest pettiest ways. My parents, at least my mother, loved it.
I gave in grudgingly when Dee reminded me it was written by Aaron Sorkin, king of dialogue. When I found out Javier Bardem was playing Ricky I prepared myself for a glorious train wreck. Turned out to be pretty compelling although it could have used a deep trim.  Who knew what went on behind those scenes?  Kidman and Bardem were masterful, but Bardem was too old, and Kidman was weirdly ghost-like under strange makeup effects so I listened while I composed with cloth.
No pins, straight to basting even though my hands hurt from all the cleaning clutching I've been doing. Nothing else may come of this at all, but it unwound me through the evening. A comfort.
In all the years I've been reporting from this space, have you ever seen it so sterile? My rug arrives tonight and tomorrow I will attempt to unroll it and levitate the furniture into position very incrementally and if I can't, I wait for help. Those sliding feet things are pretty cool. Those wire racks are going. I still don't know what will go where. 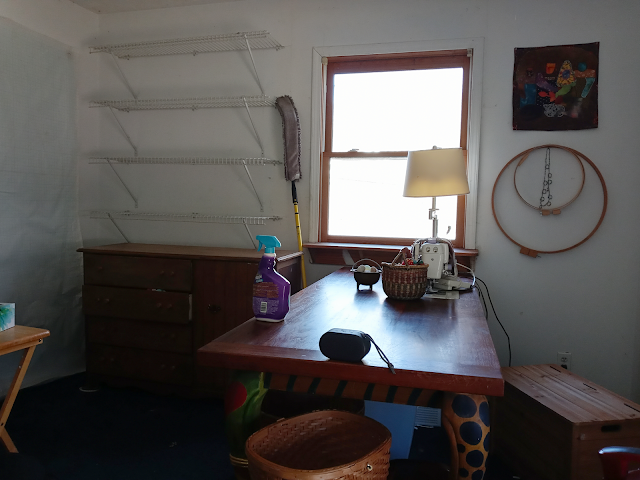 Can't wait to see it all moved in!
I was not a huge fan of Lucy, because I couldn't stand waiting for her to do something super dumb! It annoyed me to no end. lol Now that you say it, yes the meanness of wanting to be better was not a message I like.

Wow. I cannot believe that space. I’m impressed. It must feel really good. Maybe you can get a waffle top for the twin mattress?

I can't find the words

Now...I want to clean up my overcluttered space. But I need someone with lifting power.
There is so much that needs GOING and not STAYIING in my little room. It was once an office.
with office furniture. A large two drawer filing cabinet that should be taken to Goodwill.

Will I go in there today- NO.