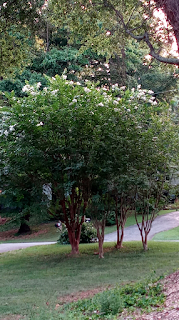 The grove is in bloom. They are cinnamon bark crape myrtles. Planted on the four points of the compass, white North has always been the most vigorous, pushy member of the group. We haven't topped them in three years, but come January, it's going to get a serious pruning in hopes of giving the other three a chance to catch up.

I have resolved to stop taking poison, knowing how I plan to help those who need camping gear or assistance.

Also, I've been invited to participate in a local gallery event! Time to see what's still in the closet.

Charlie is home! And I swear he grew two inches in two weeks. While he was away, his Mom and Dad spent every free moment redoing his room from ceiling fan to flooring. This room had the dark green walls and carpet that Jake chose as a teenager. Change was past due.

Cool room for him! Love the lights :)

the lights! ... and the repurposed closet! ... I can't tell you how many closet doors have been taken down and stored in our attics over the years

love the look of wonder in Charlie's eyes