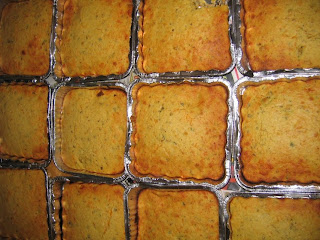 Here's my contribution to Team Climax. 12 pans of Cliff's Magic Cornbread, oops make that Yankee Climax Cornbread. We won first prize for it in 2003. This year, it's the chili's turn to shine. Jim looks forward to this outing from year to year the way some folks do Christmas. It borders on obsession but I remind myself it could always be worse and this year all the planning and anticipation contributed to his recovery. He left early yesterday to set up camp at Stone Mountain for the 2008 Great Miller Lite Chili Cookoff, which despite the sponsor, is a family venue. You are more likely to get your toes run over by a stroller than you are have a drunk spill beer on you. I got up early to bake and Colin will deliver to the booth shortly. I'll post more pictures and judging results later tonight. Cross your fingers! To the Anonymous commenter who was concerned that this was cheating. Our entries are prepared in camp according to the rules and regulations under the watchful eye of the judge's observers. The food we generously serve to the public for free is prepared with quality ingredients under hygienic conditions. Please come by next year and watch Chef Jim make magic but you had better be up with the chickens! Although we didn't place this year, a great time was had by all. People who have to cheat to have fun camp out with cowards who make anonymous posts!
at September 27, 2008

Hah! When I first looked at the picture, I thought it was a piece of fabric dyed with construction fencing! Boy, do I have dyeing on the brain...

Went to that web page for the chili cook-off ... looks like a LOT of good times and fun! Is your prize winning cornbread recipe a secret one? It sure looks yummy!

glad that jim had a good time thou he did not win. i was wondering when you would post how it went. sorry to hear about negative comment and of course they were "anonymous", they rarely have the courage to state who they are. i think there is group who have nothing to do but read blogs and leave negative comments...some sort of mental midget in my book. i find your blog both entertaining and informative...keep it up :-)

so glad you refused to post my entire comment and refused to post the official rules now in all honesty i can call you a cheater. At first I was just pointing out rules but You have now made it personal.

Hope posting this makes you even Happier. How sad that your life is so very small and empty as to stalk an old blog post just waiting with baited breath for your feckless comments to be posted. Rush for the dictionary if you have one.

You would be even happier to note that I called the Sponsors and confirmed that we not only acted within the rules but were thanked for exceeding the amount of food required by the rules so more people could enjoy their day at the park.

And finally, you should know that even when you post anonymously anywhere on the internet your computer's IP address will reveal that you are in D'ville and more. Get a life.