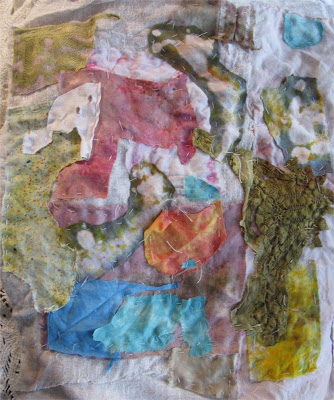 I've decided to stop bitching about it and see how I can go about using fabric more like paint. There will be  a lot of false starts with stitch so I've basted this one loosely so the end wont have little blood stains all over it.

Most of yesterday was given over to finally getting my hearing tested and confirming what I suspected - that I am hearing less than half of what is said and have worked out a complex of methods to work around the loss. I really didn't realize how much I was depending on visual cues in face to face conversations.

The phone is another big issue. My job entails listening to incident reports over the phone and I depend a great deal on the fact that nothing much new and strange happens on a daily basis...repetition and anticipation, sort of human predicative spelling. I have reports typed out before people even finish dictating them. How many stupid ass ways can one slip and fall or burn oneself in a commercial kitchen anyway?

The doctor couldn't say if the tinnitus was a separate issue from the hearing loss but it certainly compounds the problem. I really miss stone cold silence. My range of hearing is narrow and odd and hearing aids are called for as soon as possible to prevent further loss/damage. They may or may not help the tinnitus. When it's at it's lowest level, I can pretend it's only cicadas partying hearty on midsummer's eve. At it's worst, a jet's engines revving up just before take off...only it never does. A new element cropped up the other day -- a mercifully short low toned hum, not unlike the reverberations of a really big bell ..it came creeping in my left ear like a fat fuzzy brown caterpillar, and then thankfully slunk away. Sometimes it's hard to hear my own thoughts.

Yes, because as does any painter, you are mixing your own palette. Me, it's the thread as brush strokes :)

love that you are pushing through it. you're super talented and something fabulous is bound to emerge.

I have the constant tinnitus, If I think about, like right now, it drives me nuts. Mostly, it has become part of my being and I just try to tune it out. I think it gets worse when my sinus congestion is worse, but ent doc says there is no relationship. Good luck with the fabric as paint. It is a constant quest of mine.

this image looks very painterly to me. the sounds of silence are a wonderful thing. hope you can somewhat mentally turn off the the unwanted noise and that the aids will help.

Yes, I like the looks of this very much...very promising, indeed. I do hope that your hearing improves; the aids are a modern miracle. And when the world/whirled gets too noisy, you can simply turn them off and they act as ear plugs.

As for the hearing, lack there of, and addition of unwanted...my heart goes out to you. I was just informed by someone dear to me that his hearing often sounds like the Seinfield episode with the 'lowtalker'...in that conversations often sound garbled and barely audible. So frustrating. Take care.

Oh, I hope they can improve your hearing, and reduce the tinnitus! I have a constant high-pitched 'cicada' with me at all times, and I swear my DH purposely turns his back to talk to me in a low volume whisper! But when I had my hearing tested a few years back, they said I have very little hearing loss... go figure! Meanwhile, your fabric 'painting' looks very interesting, and I look forward to watching it's progress.

Hearing loss sneaks up on one, and it must be very upsetting.

Your last sentence about how it is sometimes hard to hear your own thoughts really bothers me.

Truly, I hope that now that you are aware of these things, that they can be 'fixed'. Getting older is no fun.

yes. I have learned to compensate for the hearing loss in a variety of ways. The loss of "inner quiet" is much more daunting. So much of what we do as artists begins with an inner dialogue that for now escapes me. I am going through the motions but I cannot hear the "aha" bell for the racket.

sorry about the tinnitus -it sounds dreadful. I look forward to seeing more of your fabric painting...