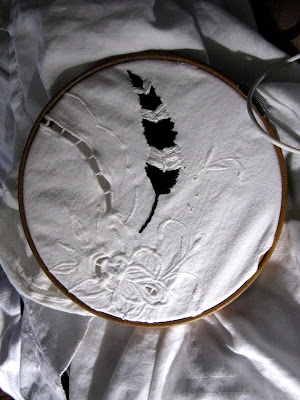 I have a new ritual these days. Some might have noticed that it's eating into my blogging frequency. Probably.

I get up as soon as Jim and Colin leave for work, go downstairs and push the button on the coffeemaker that Jim has blessedly prepared for me.

By the time I've finished dishing out three different kinds of cat food and refereeing the jostling hordes (really, there are only four) the coffee is ready. I take it back upstairs, set it on the nightstand and get the laptop from the studio. It's still dark out as I transcribe whatever scribbles appeared in the notebook from the day before and fatten them as I go. An hour or three will go by before I notice.

If I get bogged down, I will take a new page and devote it to just focusing on a very small detail - Annie Lamott's "square inch picture frame" trick that she would use to keep up the writing momentum.

This morning I went after the day my father's mother taught me to cross stitch and why. The embroidery hoop in the picture is one of a pair that I still have that belonged to  Nell. This is the smaller of the pair and the same ones that I used that first time 58 years ago.

She showed me just how to set the hem of the cotton pillowcase between the hoops and watched over my shoulder as I constructed a little march of tiny green DMC  Xs along the hemline. I spent a lot of time looking at the backside and trying to make it as neat as the front, no mean trick for a four year old. My real objective was to be as stingy as possible with the thread because Nell told me that after I had used up the three hanks she had given me I would have to buy my own thread. She would be giving me twenty-five cents a week for helping her in the kitchen. Twenty-five cents a week equaled five new colors from the stationary store down the block from our house. I couldn't wait!

Nell's tools. and you kept them

Beautiful work - and love your new blog header! A change is as good as a rest. :)

Deb, I love it that you are writing! I think you were born to it - not that that makes it any less hard to polish up sometimes, I s'pose. Writing, dyeing, stitching - somehow they are all aspects of the same voice; they tell your stories, they move what's inside out into the world so others can say "Ah, yes!"

Do you ever wonder why it seems to be important to us - "us" being artists, women, human beans, whatever - to get our voices out there in the world? I do. I wonder why just doing our things, working on our craft, creating our whatever-it-isses, isn't quite enough; why we need to give it that extra push to go forth and be known. Is it like giving birth; it surely doesn't work to just keep the ever-growing baby inside forever - when the moment comes, out it must come, ready or not.

Fabulous that you are writing your memoirs...if that's what they are.

I want to do that too.
Someday.

Not memoirs..let's call it historical fiction. OK, I was there and remember some of it but it would be so boring without the devil of invention riding along!

oh i do love this!

oh i love this too. it brings back memories of stitching with my grandma.

Such a warm and lovely story. Thank you for sharing.

Wonderful memories, and those times with grandmothers are priceless.

Nell's hoop, the memories it must bring floating up from that time to this one - the thread between that tugs on our heart.
Keep it up. We are all dreaming with you.
Cat