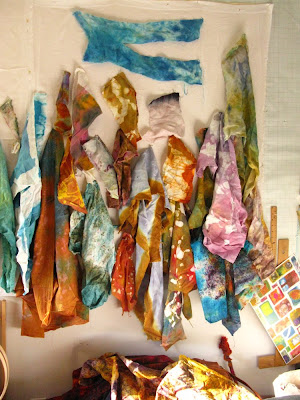 It's going to be a spectacular day so I'll have to spend at least part of it outdoors. There's still planting and deck cleaning to get done.Such a suffering!  But even before I put the coffee on I took the dyestock out of the fridge so it could warm up.

I stuck most of the usual suspects up on the design wall - mostly to keep them from becoming a cat nest. I know that they all won't be major players but the flavor and size (46" square) for the next piece is semi-set. Yes, that is my gator head floating over all. 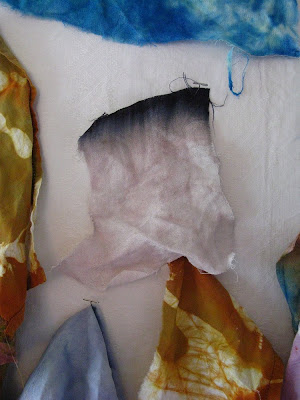 Despite appearances there will still be a lot of black and white going on. I am very interested in the wet in wet transition that happens in dye painting and have almost no scraps left over from last summer.

Once the dyes are up to temp, I'll be cutting and ripping some raw shapes and seeing what the new blacks from Prochem can really do.
at April 13, 2013