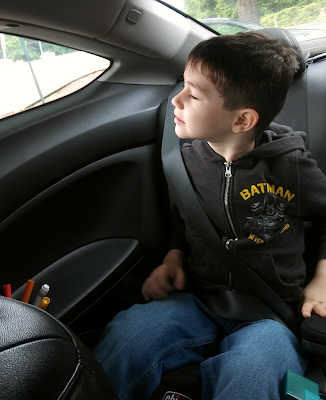 The last thing I did here was promise a stitch tutorial. I took a clutch of pictures that turned out crappy.
Then, LIFE, and boy, am I out of practice and shape for being Nana! It's disturbing how much that skillset (and the flesh) has deteriorated since BC (need I explain?)

No excuses, unless you count sloth & ennui.

And where do I get off lecturing a five-year-old on the dangers of uttering the words "I'm bored" ? 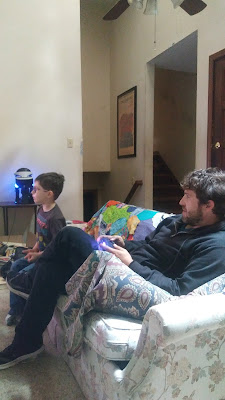 In the first picture we are parked across the street from a construction site where, right at the edge of the road, a squad of excavators and dumptrucks were frantically laying waste to the countryside for who knows what. They were trenching and laying yard-wide pipes, building mountains, climbing them precariously, then knocking them down - so something huge. We were both fascinated for about 20 minutes.

I don't know what I would have done without the assistance of his uncle. Colin is passing through a second child/teen hood with the video games, et al that he and his brother did without when they were kids and such stuff out of reach, and thank goodness.
at May 24, 2020

When Don hit "one of those" birthdays he made annotated sets of mix-CDs (how old-timey) titled "60 for 60" ... the songs were divided into: Before Children, During Children, and After Children. Guess we're going to have to reconsider the meanings of BC, DC, and AC (and let's hope we get to AC sooner rather than later)

and yeah, going into parent mode with grandkids never works out very well (nor did it when we were parents, come to think of it)