A good day away from the World.

This is what I needed today. A few new books (and the time to start each).  A little spell stitching (Liz, I ripped out the ERS in Sisters and re-did it properly) 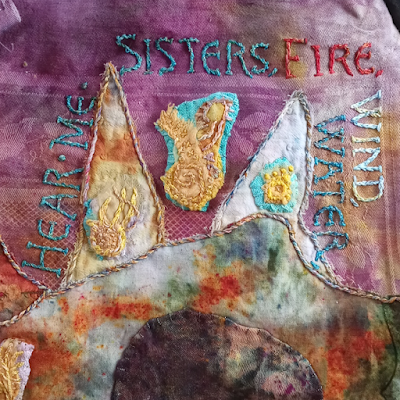 And the good company of a fellow artist and writer over bacon, coffee, and fried onion chips.
He's working on his interpretation of the Gravity Falls zodiac. Making his own up as he goes.
We talked about The Cheese and confirmed that the best, number one Cheese needed to be Family & Friends, followed by Lego and TV.
I taught him the old phone prank: "Do you have Prince Albert in a can?"
(interlude to google Prince Albert Tobacco)
"Yes."
"Well, let him out before he smothers!"
He took his tablet downstairs, called my phone and we executed it flawlessly. It still makes me laugh, but I think Charlie just went along to amuse me.

I taught G "Pete and Repeat were in a boat. Pete fell out. Who was left?"

He humored me, but I'm pretty sure he didn't rush out to tell it to anyone 😉