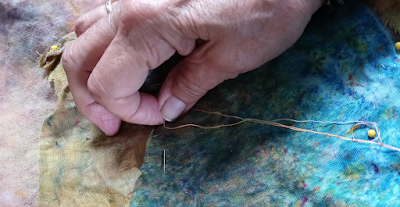 Sometime last September I had a duel with a jar of salsa. The lid would not come off and I wanted that salsa. Without bothering with the usual methods of coaxing a stuck lid - you know, tapping it on the table, running it under hot water, etc. - I grabbed it and used every ounce of strength I had.
Yes! There was salsa. There was also a very painful swelling on the back of my hand over my two middle knuckles. The usual remedies didn't help much.
A week or so later, I went for my booster shot. The dispensing pharmacist welcomed me behind the screen. He'd noticed that I had difficulty with the paperwork and was cradling my lumpy hand. He asked me to spread my hand out on the tabletop and explained that in Pakistan he had been a hand surgeon. He had me move my hand thus and so. Touched the swelling very gently and declared that I had torn a tendon. Ice, rest, and a long recovery period were prescribed. No more fighting with recalcitrant jar lids. And a COVID jab for good measure. He was right.
Today was the first time since then that I was able to thread a needle and use it without any pain. I'd almost forgotten it was something I did all the time without even thinking about it. I basted a few likely players into position for about an hour and called it enough. 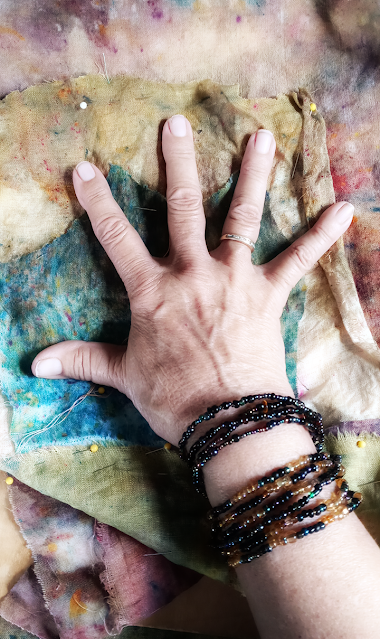 Actually, it was Bailey who called it enough. He's a peripatetic fur snake but when he wants love, he leaps into your lap and demands it. Clambers over whatever you have in your lap, damn the pins and needles.
Maybe for only a minute or three before he dashes off, but it's always a miracle to see him drop the tough guy routine for a dose of mama love. Irresistible.

wow...now I won't try to twist caps like I'm a muscle builder! HA I have carpal tunnel and another wrist diagnosis and wonder why those jars, caps, etc. are so darn tight we can't get them off regardless. Even my hubby has a tough time!!

Those push down and turn tops on some liquid products? I have an old-fashioned church-key ready to punch a neat little hole in the plastic if that top does not disengage the first time I try it.

Glad you are healing Deb.

I hate being acting like I'm "fragile" ... but things do seem to break way more easily than they used to ... your story is a definitely a cautionary tale that I'll keep in mind

I tap my jars upside down on the floor. I have a tile floor, so I imagine how the jar will break and I will have a BIG mess- yada, yada, yada. I am a retired occupational therapist, and my hand strength is replaced with soreness. It is part of the joy of caring for others, I guess. Thank goodness for Tiger Balm ointment. Take care of those precious tools that make your beautiful art. We only get them for a short time, and no sense opening jars and tearing tendons. It's good it is dyeing season and we can do other things with our paws.