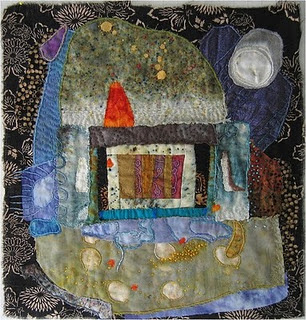 "The Stars out of Place" was finished in the spring of 2010.  It was inspired by a nightmare, the kind that is so real that you wake up in a cold sweat gasping for air.

I was almost nine when Sputnik was launched and we had a neighbor who let us lie on the roof of their screen porch at night and watch that tin star crawl across the night sky while we bounced back and forth between AM radio bands listening to Murry the K or Scott Muni.

It all seemed pretty benign to me and I didn't understand how some adults perceived this to be some kind of threat from the Russians. That all became clear to me after I read "Hiroshima" later that year. That damn book sure took all the fun out of Godzilla.

Still I became a night sky watcher for the beauty of it and became intimately familiar with the locations of the heavenly bodies and the names of all the constellations. Total immersion in the Zodiac soon followed.

In my nightmare, I went outside on a crisp winter evening and looked up to find the stars all jumbled and the moon full and leering, too close, in the wrong quarter of the sky  and shedding wisps of pink poisonous looking gases.  The air was too thin and tasted metallic. I closed my eyes so hard they hurt, woke up in sudden disorientation and willed myself awake for the rest of a long night. Despite my best efforts to forget, it was a keeper.
at September 16, 2013

Oooh Deb! I love this one very much (sorry for the scare of a dream that inspired it!) Everything about it is just right :)
I have my mom's old paperback copy of "Hiroshima" (copyright 1946) - but I don't recall ever reading it!! haha Of course the guy has, he's much better read than me. It'd probably fall apart in my hands if I tried :)