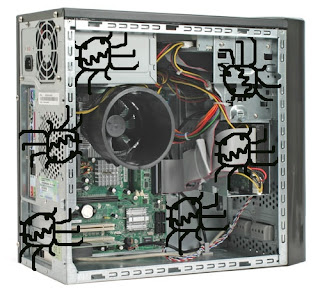 oops, that was me.

we too had lots of problems recently.

ten years old, and could be rebuilt no more.

we bought a new cpu and kept all the rest. heres to better luck for you.

I have my daughter's old dell laptop from when she was in college--I had some trouble with it, and took it to work for some IT guy to look at it. It also heated up my whole room when it was running, my cat definitely liked to sleep on the keyboard. Turns out the fan was being choked off by a combination of cat hair, dog hair, and dust. Your computer might just need a cleaning.

Shades of a few years ago with our laptop are coming to mind!! Good luck!!

Got your files backed up? Which reminds me, I got some cans of computer duster... someday, I should probably try to clean the fur-balls and dust bunnies out of the computer casing... ;->

i can totally relate. i've had mine in the shop twice in the past six months. i keep hoping it will continue to chug along. i am staying in austin, got her the 17th, will get back to the UP dec. 1st. one bright note, mary gave me her old lap top...what im using right now. it is a bit diff than a reg pc but it works! it uses xp. i need to keep it plugged in. i might have to replace the battery but a small price to pay instead of having to buy a new pc. i will continue to use me old one and keep this one upstairs.
i really like the quilt you took to the park and also the one on page titled slog or something like that. keep up the good works. susan